Here ends the coverage on our live blog for round 4 in the group phase of the EHF European League Men. Remember you can read the reviews of all four groups on ehfel.eurohandball.com tonight.

Next week we are back with round 5, which includes many eye-catching highlights again, like defending champions Benfica hosting Montpellier in group A, and the two unbeaten leaders in group D, Füchse and Skanderborg-Aarhus, going head-to-head in Berlin. So make sure to join us again next Tuesday!

For now, it is goodbye and enjoy our big gallery with 36 pictures, covering all 12 matches from tonight:

The biggest upset of the night has certainly been Ystad's terrific win over Flensburg. So let's hear from Ystad head coach Oscar Carlén:

Fantastic game, amazing victory for us that gives us a lot of self-confidence! I am very satisfied with the way we played, without respect against one of the best teams in the world.
Oscar Carlén
Ystads IF HF head coach

Tonight the EHF European League has lived up to its billing as one of the most spectacular handball competitions in Europe once again!

You can now watch the highlight videos of tonight's key games:

We have made a YouTube playlist of today's hottest #ehfel games ⏯️

And this is the complete overview of round 4 results. Indeed, what a night!

Schaffhausen down the title holders, @YIFhandboll beat SG Flensburg and @bmbenidorm win in the last second. What an evening! 🔥

Here are the full results of the late matches in round 4:

Skjern dig deep to keep the points in Denmark. They come from behind and use a 5:0 run halfway through the second half to get on top of Granollers, who suffer their first defeat after three straight wins.

With Skjern now four goals ahead against Granollers with three minutes left, it leaves PAUC vs Valur and Sporting vs Balatonfüred the only close matches in this late session going down to the wire.

Oh, that slow-mo at the end! Jönsson from 🇸🇪 is on seven so far tonight! @SkjernHaandbold pic.twitter.com/aeII7PZgy0

A sudden 5:0 run for Skjern give them a three-goal lead over Granollers: 24:21! The first time the Danish side are ahead by this margin. Can Granollers, the unbeaten group C leaders, hit back?

Nothing separating Skjern and Granollers: 21:21 after 13 minutes in the second half. The hosts have had a few more shots, the visitors the slightly better efficiency.

Best goal of the round? Füchse on fire:

The expected close game. Granollers have a 4:0 run to come from 5:4 down and go 8:5 up on Skjern, but their lead has never been bigger than three. Alfred Jönsson with six for Skjern and Pol Valera with five for Granollers the best scorers in the first half. Granollers will do well to maintain their unbeaten status tonight...

Elsewhere, Nexe (18:11 at Hard) and Füchse (17:9 against Aguas Santas) are cruising towards big wins.

In Austria, Nexe seem cruising to a huge win over hosts Hard, leading 15:9, also thanks to six goals of Fahrudin Melic.

Looks like the unbeaten status of Nexe and Füchse will not be endangered tonight, contrary to Flensburg, who have lost to Ystad in Sweden earlier.

All matches started at 20:45 pretty much still in the balance after the opening quarter, except for Füchse, who lead Aguas Santas 11:5 after 17 minutes with Jacob Holm and Milos Vujovic both netting four times.

Francisco Costa gets better every minute he is on the court, look at that power! 🚀@SCPModalidades #ehfel pic.twitter.com/cGi7qlYb8x

Take a deep breath, here we go with the final batch of round 4 matches right now on EHFTV:

And THIS is how Kadetten downed the titleholders: on a last-second penalty, converted by Odinn Thor Rikhardsson to give the Swiss team a 26:25 win over Benfica:

The pressure was on and he didn't fold! Schaffhausen take the full points LATE! 💥👏 #ehfel pic.twitter.com/zE7UpsShGs

Crazy scenes in Sweden! Ystad hold on to their early lead for the entire match to beat the mighty Flensburg by four goals. That ends Flensburg's winning streak in this competition. 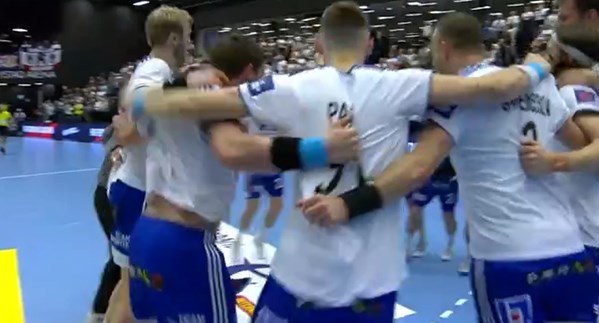 No messing about here. From a save to a goal in 8 seconds.... #ehfel #SkanderborgAarhus pic.twitter.com/NzDkfI0uBe

Ystad standing strong after the break as well. They are up 25:21 with 10 minutes left. Is there a way back for Flensburg? The unbeaten favourites from Germany are struggling to find gaps in the tight Swedish defence. Maybe a team timeout from Maik Machulla helps. 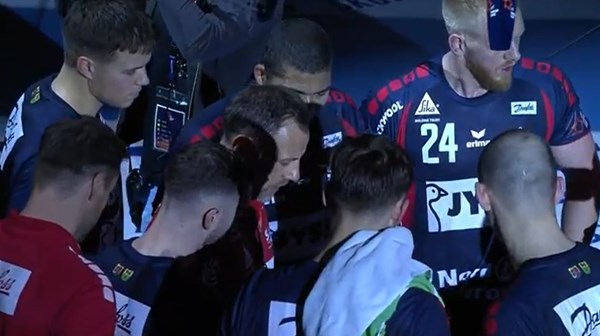 Shout-out to Kadetten, which were behind against Benfica early on but have completely turned that match on their home court around, now leading the titleholders by 19:14, thanks to five goals from Joan Cañellas and four from Luka Maros. 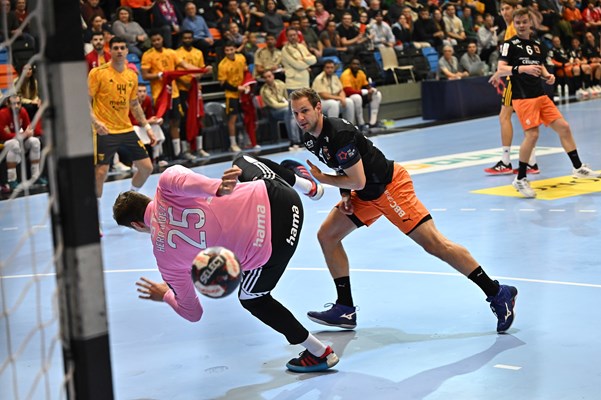 Speaking of Kim Andersson, this is an example of what we have just been referring to:

This is so audacious, right over the keeper's head from the backcourt! Kim Andersson never disappoints! 💥

And mind you, good old Kim Andersson is having some match for Ystad. The former THW Kiel player has scored five goals in the first half against Flensburg. We had this feature with Kim just yesterday on eurohandball.com:

Kim Andersson 🇸🇪 is looking at his past matches against @SGFleHa 🇩🇪😮 @YIFhandboll

What a first half in Ystad! Flensburg were even 17:12 down entering the last minute of the first half but Mads Mensah Larsen and Johannes Golla managed to reduce the gap to three.

The winning streak of Flensburg seriously under threat here?!

Elsewhere, Kadetten lead titleholders Benfica 13:12, Montpellier are 25:16 (!) up in Veszprém, and Skanderborg-Aarhus 21:13 against Bidasoa Irun.

Skanderborg-Aarhus are one of the unbeaten sides in action, and they look like consolidating that status as they lead Bidasoa Irun 19:12 with three minutes left before the break.

Montpellier might be leading early on, but check out these saves from Veszprém goalkeeper Tibor Balogh:

This is one for the highlight reel! Amazing stuff by Tibor Balogh! 🚧 #ehfel pic.twitter.com/O6KIpyIyB1

Wow, what a start in Ystad, where the hosts are 9:4 up against Flensburg! Elsewhere, Benfica (in Schaffhausen) and Montpellier (in Veszprém) with early leads.

No time to waste as we have a six-pack for you right now on EHFTV:

Here is THE moment in Hungary tonight:

Can you believe it? What a start to round 4 as Benidorm have a 7:2 run in the closing stages to beat FTC 33:32 from 30:26 down. Ivan Rodríguez Martínez beats the buzzer to give Benidorm their first points in group B as the Spanish side draw level with FTC. Ivan Nikcevic with nine the leading scorer.

Well, maybe we have been a bit early with that production, since Benidorm have had a sudden 6:2 run to draw level with FTC, 32:32. What a finish!

The margin is four (30:26) with 10 minutes left on the clock: Looks like FTC are closing in on their second home win this group phase. They also have scored at least 30 times in all four matches so far. Impressive! 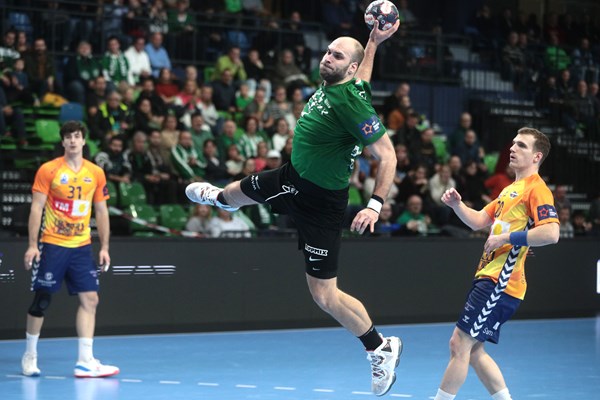 Ádám Borbély is at it again:

Ádám Borbély was in top form last week and he's doing it again, just wait for the second save... it's pure 🔥 #ehfel #FTC pic.twitter.com/iGdihIpxq9

FTC opened the first half with this in-flight goal. Can they keep it up in the second half? Find out live on EHFTV now.

Lékai keeping it simple: sees the space and plays the ball into! 👊 #ehfel #FTC

Happy faces in Hungary, as FTC hold a two-goal lead over Benidorm at the break. Maté Ónodi Jánoskúti for FTC and Ivan Nikcevic for Benidorm with five goals each the best shooters so far. 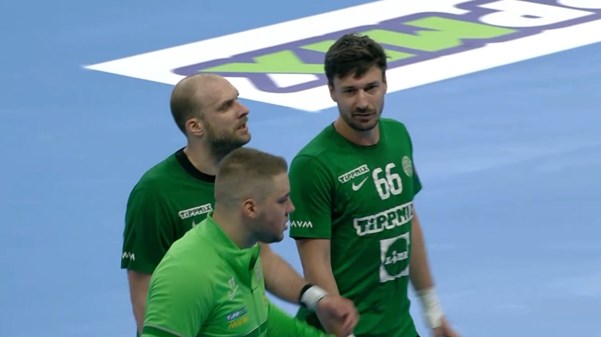 FTC lead, but Benidorm have provided us with the highlight so far:

Not sure what was better, the spin or the roll to get right up again! Balance on point, nice job Iker Serrano! 🤸‍♂️ @bmbenidorm #ehfel pic.twitter.com/OBT5mZTZ4e

Early team timeout for Benidorm as FTC are pleasing the home crowd in Hungary so far with a 9:6 lead after 12 minutes. 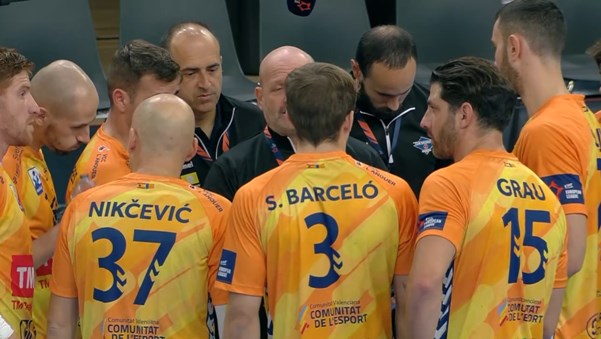 Let's go! FTC (two points) and Benidorm (zero) are ready to get round 4 going with this group B game in which both teams are eager to earn points and boost their chances to advance. 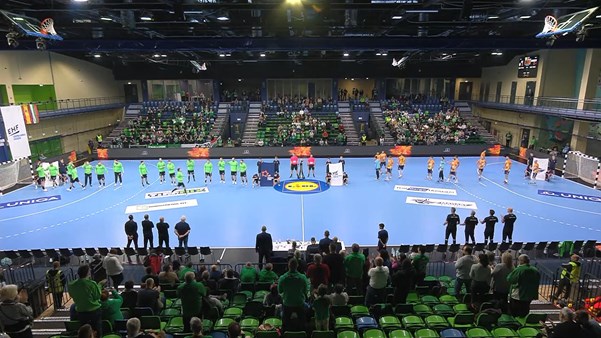 Benfica are up for a true challenge tonight as they meet Kadetten in Switzerland at 18:45 CET in a duel between two teams that are both on four points in group A. Who takes the advantage tonight? 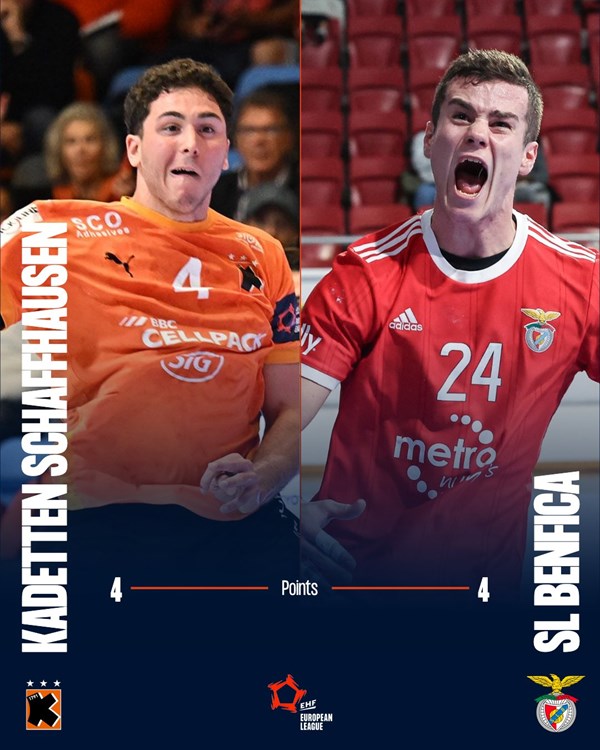 One of the unbeaten teams, and one seen by many as the main title contenders, is Flensburg, which face a tricky away match (18:45 CET) at Ystads IF HF, where former THW Kiel player Kim Andersson is still going strong at age 40.

“We must not be afraid of Flensburg, play like it is any other match,” says Andersson, who lost only once to Flensburg in six years with Kiel. 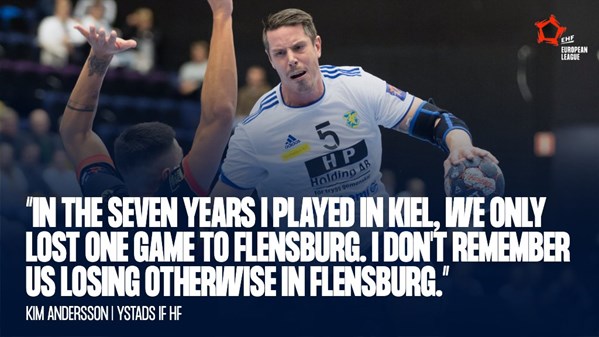 We throw off the evening in Hungary again, where FTC host Benidorm at 17:00 CET. The other matches are following either at 18:45 or at 20:45 CET and include the six teams that have won all three matches so far: Montpellier (group A), Flensburg (B), Granollers, Nexe (C), Füchse and Skanderborg-Aarhus (D).

No other team is unbeaten as, remarkably, we have not seen a single draw in the 36 matches in the group phase so far.

Here is the complete preview of all matches this round:

Good afternoon and welcome to the live blog for round 4 in the group phase of the EHF European League!

We have another bumper night of handball coming up so quickly check out the full schedule below: 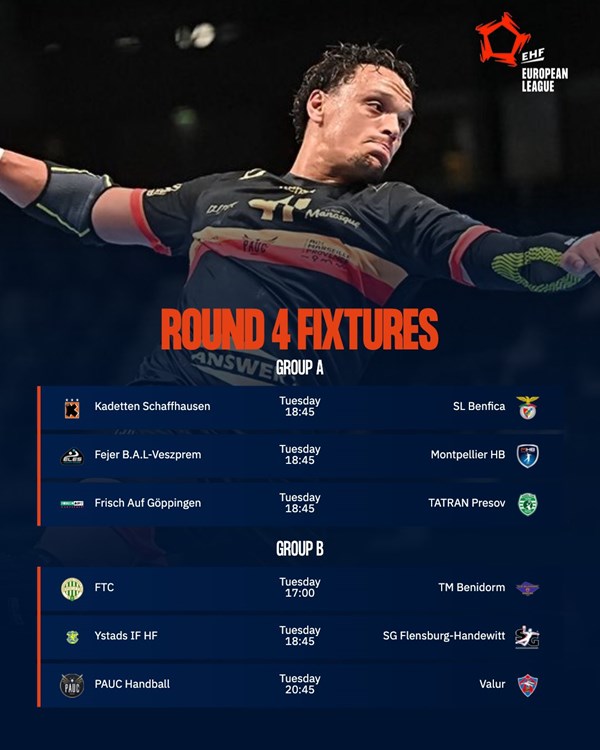 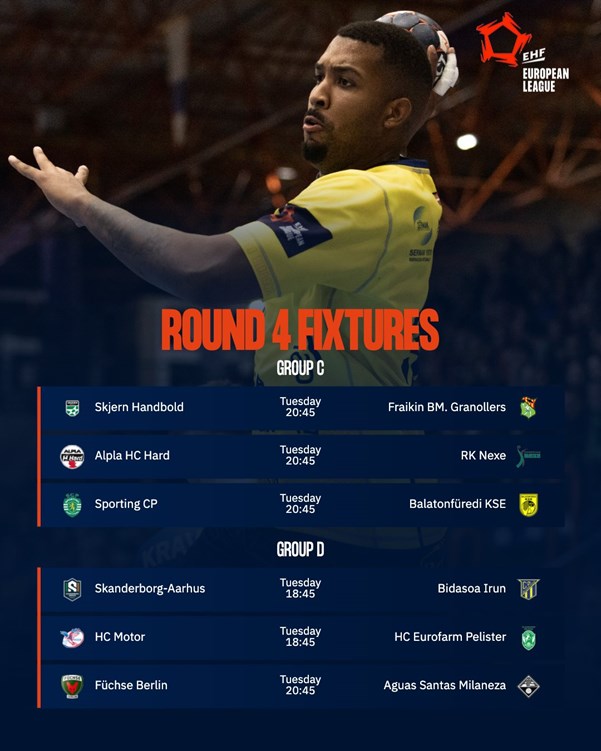 Next Article Cavalcanti: “Nantes have the quality to beat the best teams”

SUMMARY: Montpellier and Berlin first to book tickets to the…

SUMMARY: Running coverage of the 12 matches in the last round of the EHF European League Men group phase before the winter break

ROUND PREVIEW: Montpellier, Nexe and Füchse have not dropped a point so far as the second half of the group phase starts

SUMMARY: Running coverage of the 12 matches in round 5 of the EHF European League Men 2022/23 group phase

ROUND PREVIEW: Füchse host Skanderborg-Aarhus in Berlin in round 5 of the EHF European League group phase

Four unbeaten sides collide in round 3

ROUND PREVIEW: Two mouth-watering clashes highlight a superb round as the EHF European League Men returns

ROUND PREVIEW: The EHF European League Men is heading into round 2 of the group phase on Tuesday

SUMMARY: Coverage of the 12 matches in round 1 of the EHF European League Men 2022/23 group phase on Tuesday night

ROUND PREVIEW: The EHF European League Men starts its 10-round group phase with 12 exciting clashes this week