After the opening two matches on Saturday, the excitement in the group phase of the EHF European League Women 2022/23 continued on Sunday.

In the clash of two powerhouses in group B, Ikast Handbold handed former champions Neptunes de Nantes a double-digit defeat (30:20), while SCM Ramnicu Valcea won 40:30 over Praktiker-Vác in group D.

In a close game from the start, Molde were the first side to gain a significant lead as the Obaidli sisters, Sherin and Mona, put them in front 8:5. Borussia Dortmund quickly responded with Sara Garovic and Alina Grijseels taking control of the match, but Yara Ten Holte made the biggest difference with 19 saves.

Ten Holte helped Dortmund establish a seven-goal lead, 28:21, the biggest of the game, but everything almost fell apart for the German side in the last 10 minutes. As Dortmund kept making mistakes, Molde grabbed an equaliser and then went ahead 32:31. Who scored? Mona Obaidli, who was out of this world, netting 16 times in total. In a thrilling finish, Alina Grijseels was the home team's heroine as she scored on the buzzer to give them a one-goal win.

For the first time, Besancon started the group phase of the EHF European League Women with a win – and what a win it was. The French side defeated 2020/21 runners-up Siófok in an interesting game. The first 25 minutes of the match were close, even though Siófok struggled in attack, but Tonje Haug Lerstad's saves towards the end of the first half were rewarded with easy goals for Besancon.

The second half proceeded in the same manner as Besancon headed towards victory. Sabrina Zazai's nice goals near the end extended Besancon's lead to nine goals. Tamara Mavsar netted five times for Siófok, but her team could not do any more as Haug Lerstad reached 17 saves. 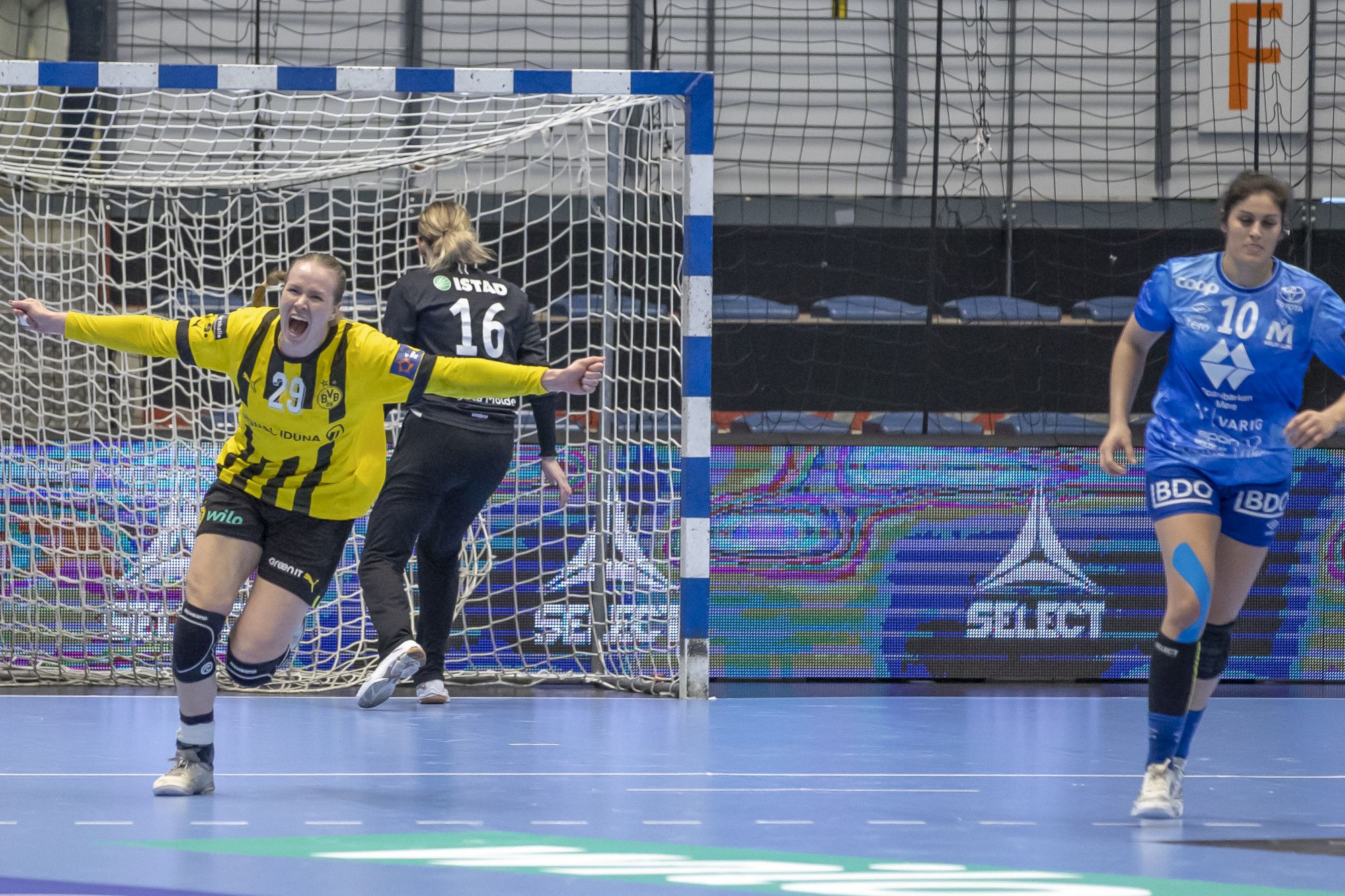 We were superior for 45 minutes, but then we didn't score again for eight or nine minutes. In the final seconds I didn't think twice – I just wanted to get the ball into the goal somehow. At first, I even thought the goal was out of time.
Alina Grijseels
Captain, BV Borussia 09 Dortmund

In the clash of two powerhouses, Ikast Handbold proved stronger as they cruised to a clear 30:20 win over Nantes. The French side never had a lead in the game, but they were close for the first 20 minutes.

Ikast's 4:0 run midway through the first half, which finished with Emma Friis' goal that gave the Danish side an 11:5 lead, said a lot about the two sides. Jessica Ryde also helped Ikast as she ended the match with 13 saves at a 42 per cent save efficiency.

Ikast doubled their half-time advantage in the second half, as Nantes's top scorer, Nathalie Hagman, was largely stopped by home side's defence, while Ingvild Bakkerud and Emma Friis scored easy goals for the hosts.

The Hungarian side started their European campaign with a win over Norwegian debutants Fana. Mosonmagyarovari had an early lead in the match and were ahead 12:5 after 17 minutes, but with Aurora Hatle scoring five times in the first half, Fana did not let go easily and closed the gap to only one goal, 14:13, in a short span of time.

Mosonmagyarovari's goalkeepers Zsófi Szemerey and Kitty Mistina stopped a combined total of 20 shots. 10 minutes before the final whistle, the home team restored their seven-goal lead (30:23) and were on course for victory. Zsófia Stranigg (seven goals), Eszter Tóth and Barbora Lancz (six goals) were the top scorers for the Hungarian side. 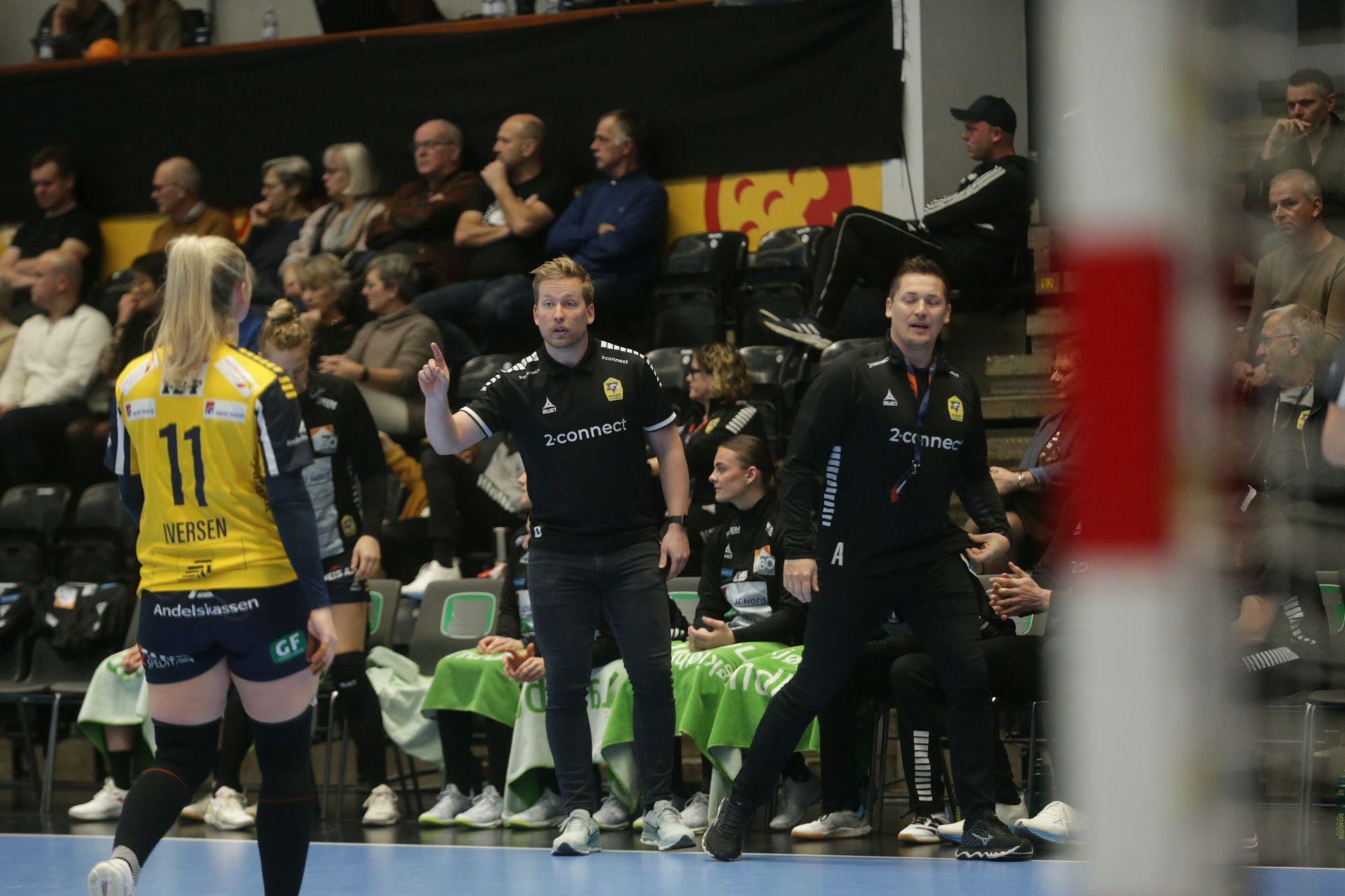 We did very well defensively and were very well prepared for their big star, Léna Grandveau. The times when we had control over her, we also had control over the team. In addition, Jessica (Ryde) puts up a really good fight, so I'm very happy about our performance today.
Kasper Christensen
Coach, Ikast Handbold

Sola continued their record of being tough opponents for Croatian teams. After last season's wins over Lokomotiva, they continued where they left off with a six-goal win against Podravka Vegeta.

Podravka, who were unable to stop Sola's efficient attack, had trouble in defence – but it seemed like the Croatian team could shift the momentum when Tina Barišic and Ana Pandza scored to reduce the deficit to one goal, 9:8. But Live Rushfeldt Deila and Guro Berland Husebø started a new goal run for Sola, leaving Podravka desperate at the break.

Although nothing changed in the second half, as Sola kept their lead, Podravka tried different options in an attempt to soothe the defeat. Experienced back Kristina Novak was the winning side's top scorer with seven goals.

Ramnicu Valcea earned a clear win over Praktiker-Vác in the second match of group D. After taking a 3:2 lead in the third minute, the Hungarian team never led again in the match. The closest that Valcea came was near the end of the first half after they enjoyed a 6:0 run, courtesy of Borbála Ballai and Natalie Schatzl's goals, to equalise at 17:17.

However, the home side pushed hard and soon saw a break as Iryna Glibko could not miss. The three-goal lead from half-time increased to a seven-goal advantage in only six minutes, effectively deciding the match. Asma Elghaoui and Iryna Glibko had an excellent shooting day, netting nine times each, while Csenge Kuczora was Vác's top scorer with ten goals. 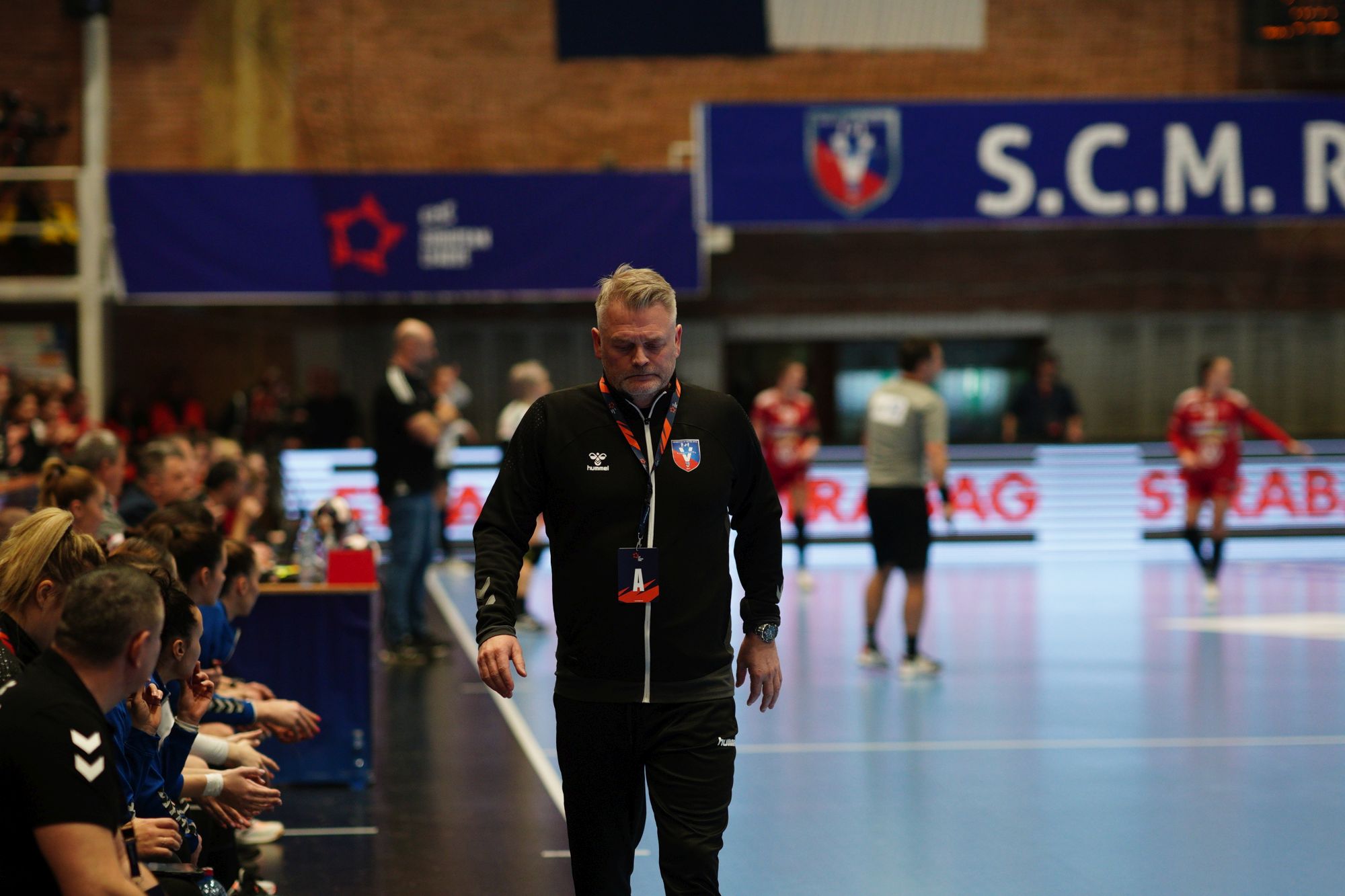 We were prepared for the game, so I was not stressed, not even in the first part. We scored 21 goals in the first half. One of my mistakes was to send in too many new players at the same time, and we lost some rhythm. I'm happy about the second half when we wrapped up the game.
Bent Dahl
Coach, SCM Ramnicu Valcea 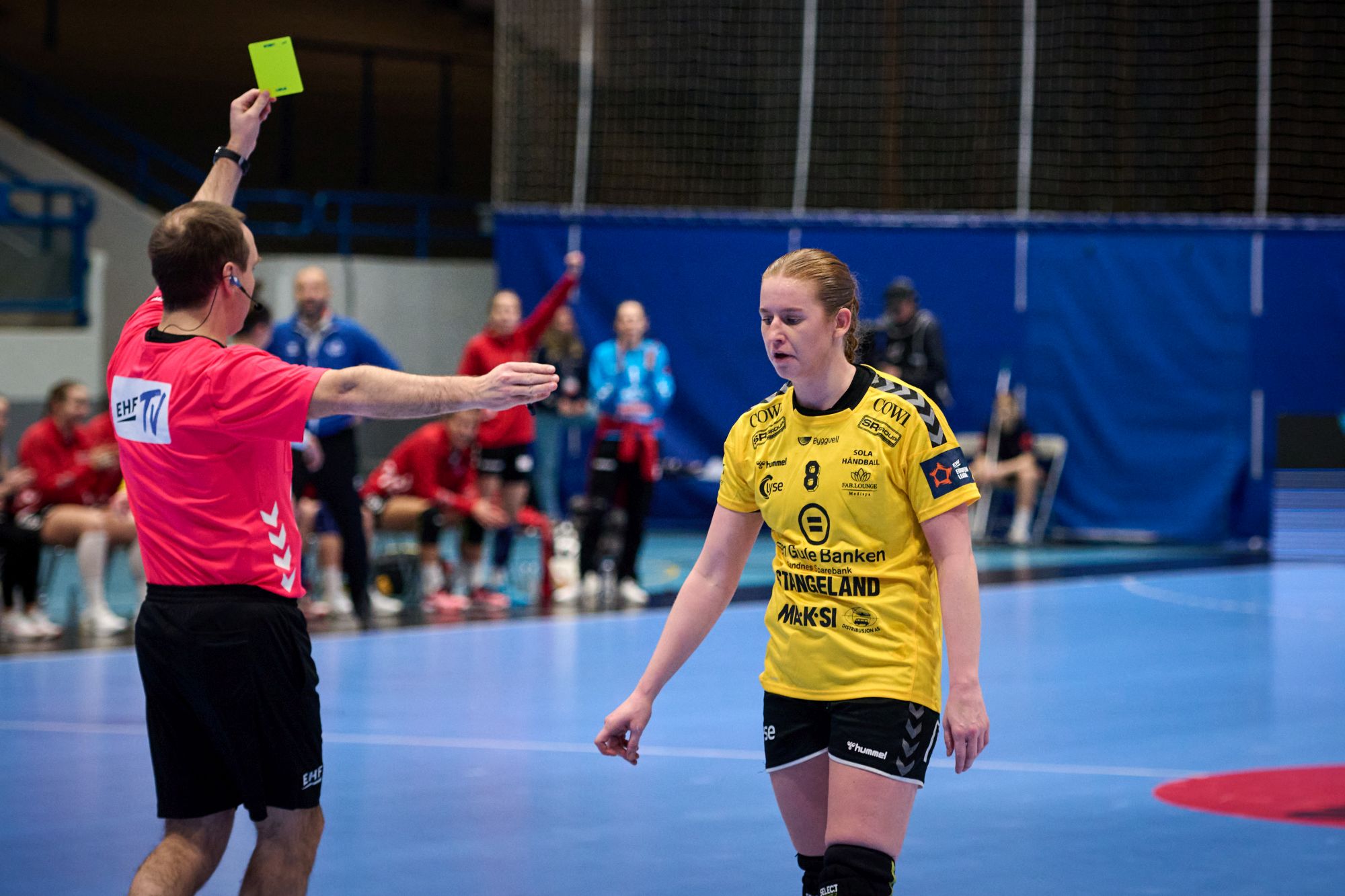 I am very proud to be captain for this team. It’s very nice to get a good start in the group phase, and we were determined to work to get a proper start. Now we have to keep up our good game and continue working for the next games.
Martine Wolff
Line player, Sola HK

Next Article Croatia, Poland book last tickets to under-21 worlds

ROUND PREVIEW: Several teams are primed to progress to the EHF European League group phase this weekend, while Lubin and Podravka face a cru…

GROUP PREVIEW: Well-known and new faces are counting down to the start of the new European season