The Danish vice-champions take on the French vice-champions on Wednesday evening in round 7’s Match of the Week. Both teams are looking for a win to bump themselves up the rankings in the group stage of the Machineseeker EHF Champions League.

The two clubs last met in the 2020/21 group phase, each winning the home encounter. They both went on to reach the EHF FINAL4 that season – although they did not actually meet in Cologne – and both have the same ambitions for this season.

But first they face back-to-back meetings, first in Denmark and then in France in round 8. Aalborg left back Henrik Møllgaard knows how important the home game will be.

“Nantes are a team which, like us, have been a bit up and down. They have played some fantastic matches and have almost wiped the floor with some of the best teams. They have also experienced losing a few close games,” Møllgaard says.

“It's an insanely exciting team that we had big problems with recently. They play fast, and they play physical, and I think they have really, really many exciting strings to play. When they play with their Slovenian playmaker, Rok Ovnicek, it goes really fast and he thinks handball extremely fast, and I think that really suits their game.”

“They are not afraid of anyone”

However, the possible speed of the game does not faze the experienced Danish defender.

“I actually think we are OK with each other. We are two teams that want to play the same way. We want to play matches with many goals and high tempo and at the same time see if we can profit from strong defensive play and in that way create some momentum for the fast breaks,” Møllgaard thinks.

“This is the same way Nantes have approached the matter, and it has become the more modern way of playing handball – and I think it is only cool that they are not afraid of anyone and want to have matches at speed. And it's only nice when things go that way. It is also the way we prefer to play.

“And then, of course, it is always some kind of balance in relation to risk, set against the speed at which you want to play in the matches. I think we have been good at controlling it in the majority of games. In a match against Nantes, who are also willing to actually just put their heads under their arms and play at full blast, it could well be dangerous. In that case we must show that it is us who have the home ground and – hopefully – that we are the smart ones,” he continues.

In the most recent clash between the two teams, it was Nantes who shone with a big 38:29 victory over the Danish team at home. When they first met in October 2020 it was Aalborg who went away with a 32:24 victory, one they will be hoping to repeat in Wednesday’s MOTW.

"We have to win at home. That is our goal every time we step on the field,” says Møllgaard. “We are not afraid to play away from home, but we know that if we want to have a really good position in the group face again this year, we need to get some points in the account at home. Especially against these teams that we would like to be able to compete with, so we will be allowed to test that this Wednesday.

“But we also know that they are not afraid to play away from home either. There are plenty of national team players who have also shown in this season's Champions League that they can beat some of the very best. For example, they completely destroyed THW Kiel. So, they are also in the hunt, but it should be two points for us. We need that," the 37-year-old Dane says.

"Briet at left back has taken a step up. They have some really physically strong line players - of course we're used to them all having that by now. But it will also be a trial,” he says.

Aalborg also know the Nantes goalkeeping set-up well – the French side said farewell to Dane Emil Nielsen over the summer, and replaced him with young Icelandic star Viktor Hallgrímsson who moved over from GOG. 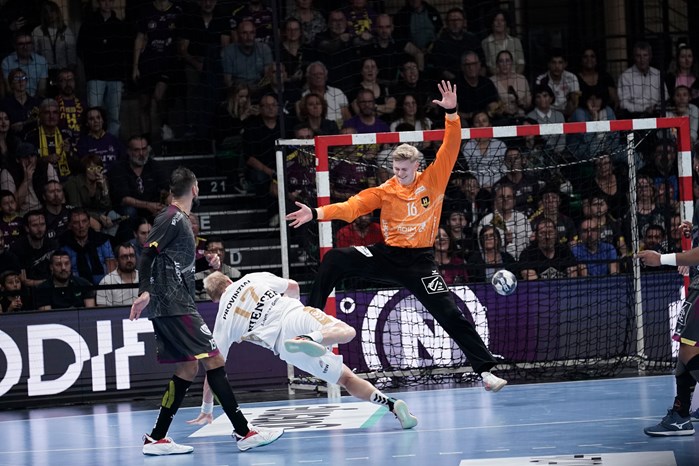 “He finished strongly in Denmark and looks like someone who has really just stepped up to his level. It may not have been as big a loss of Emil Nielsen as many had feared. He really solved the task nicely,” Møllgaard says of Hallgrímsson.

“And besides that, it's just national team players all around, they've all tried it and know what it takes. But it's especially Rok Ovnicek's speed in the middle as well as Briet's physique and shot - we're going to have to use some effort to keep that away,” he adds.

Of course Aalborg also bring plenty of national team skill to the table, led by their summer signing Mikkel Hansen alongside the likes of centre back Felix Claar, Hallgrímsson’s Icelandic teammate Aron Pálmarsson and Møllgaard himself.

The Machineseeker EHF Champions League is returning from a break that included the Women’s EHF EURO 2022, where Denmark reached their first major final for 18 years and took silver behind Norway. Møllgaard says the result was encouraging for Danish handball. While the men won medals at the last two Olympic Games, the last two world championships and the EHF EURO 2022, the women have been on a more recent upswing.

“It was an insanely good team performance. It's hard to go into a playoff and start off losing the first game, then pick yourself up and become as tight-knit and trust your own game and your own stuff as much as they have,” he observes.

“It was a crazy final round and I was very, very sure that Denmark would win the final - especially on the basis of the way the Danes managed to control the game. It was almost unbearable to see it slip from their fingers in the end,” Møllgaard adds.

“They have been close to the big results many times, so I really hoped that we would get to see them back at the very top of the podium. Hopefully this was a step on the way to getting the gold back to the Danish women," Møllgaard says.