Oftedal on Forbes '30 under 30' European sports and games

She is well-known in handball circles as back-to-back winner of the DELO EHF Champions League, All-star Team centre back in the top-flight club competition two seasons running and at the EHF EURO events in 2018 and 2020, and the 2019 IHF World Player of the Year — and now Stine Oftedal can add another achievement to her long list.

The Norwegian centre back has been named on Forbes’ European list of ‘30 under 30’ to watch, in the category of sports and games.

“I couldn’t be more surprised and I feel extremely honoured to be put on a list next to such big names and remarkable people. It feels unreal and overwhelming in the best way,” says Oftedal of her inclusion on the list.

Forbes’ description of the category is “spotlighting the next generation of game changers” — and Oftedal certainly embodies that.

Alongside her string of individual achievements and two Champions League titles, Oftedal is captain of the Norway national team and plays a pivotal role as the on-court leader in all respects. With Norway, Oftedal has won four EHF EURO titles, two World Championships and an Olympic bronze medal. She also took silver medals at the EHF EURO 2012 and the World Championship 2017.

But the reason Forbes chose to highlight Oftedal was due to her role in the development of handball towards a faster-paced game where height is not the primary requisite for success: “Stine Bredal Oftedal highlights a new generation of handball players that embraces fast, dynamic play over size and physicality,” states the article. 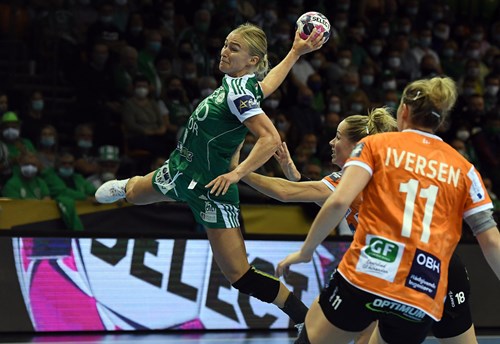 Now, Oftedal is preparing for the second-leg quarter-final of the DELO EHF Champions League 2021, where Györ will meet Buducnost in Hungary on Saturday at 18:00 CEST (live on EHFTV). After Györ won the first leg 30:19 in Montenegro — in a match where Oftedal led the side with nine goals — the Hungarian team appear in good stead to continue their title defence.

Oftedal has contributed 76 goals for Györ this season, sitting as the team’s third top scorer behind fellow Norwegian Veronica Kristiansen with 79 and Estelle Nze Minko with 78.

The Forbes lists are determined based on international nominations, investigative reporting and finally judgement from a panel. 2021 marks exactly 10 years since Forbes launched the initiative.

Gros: “We have played the best handball since I arrived”

QUARTER-FINAL REVIEW: 10 goals from the Norwegian helped the defending champions earn a 31:29 win in the first leg of the quarter-final

Late but deserved win for Barça in Brest

QUARTER-FINAL REVIEW: Meshkov keep up with Spanish powerhouse for 55 minutes but go down 33:29 in first quarter-final

Barthold: “We are here now and we are here to stay”

FEATURE: Aalborg wing believes they have what it takes to reach Cologne before the big names arrive

Six quarter-final rivalries to look out for

FEATURE: Meetings which add a bit more spice to the business end of the EHF Champions League Men

Pechmalbec: “We cannot be unfocused for just one second”

FEATURE: The Nantes line player hopes to get past Veszprém in MOTW on Thursday and qualify for his second EHF FINAL4

QUARTER-FINAL PREVIEW: Eight teams on the road to the EHF FINAL4 in Cologne, including three former winners and six finalists