27 of Europe's top club teams in beach handball return to the sand in Sicily this week to contest the first EHF Beach Handball Champions Cup in two years.

The Covid-19 outbreak saw the 2020 edition was cancelled, so this year will see the tournament’s seventh edition feature the national champions from around Europe and mark the close of the European beach handball season for 2021.

In total 15 men’s teams and 12 women’s teams will be going for glory at Isola delle Femmine, a town near Palermo, between 7-10 October.

With reigning champions BM Playa Sevilla not present at the event, 2016 champions CBMP Ciudad de Malaga will be hoping to take up the mantle as Spain’s sole representatives, beginning their campaign in group A alongside the likes of Italy’s Blue team.

Portugal is well represented in the competition with three clubs competing. Among the top contenders appear to be the bolstered V. Gaw, who will take on another Portuguese-influenced team in Great Britain’s London Beach Handball in group B.

Another local side, ASD Grosseto Handball will be up against stiff competition in group C, including Fervas BHC (HUN), BHC Sand Devils (GER) and Poland’s BHT Petra Plock.

The top two teams in each group plus the best two third-placed finishers will progress to Saturday’s quarter-finals. 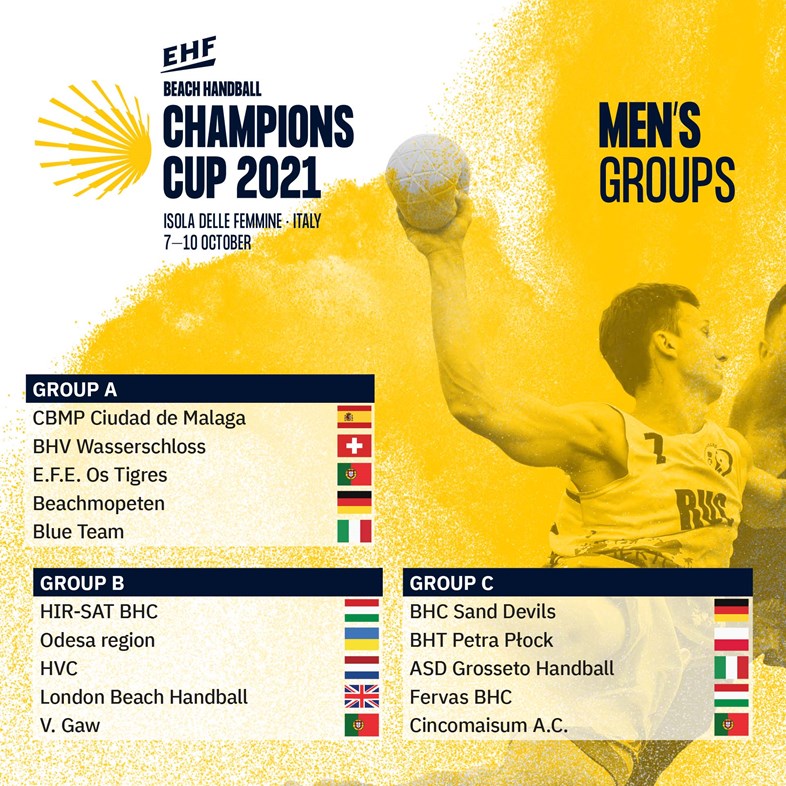 There will be a rematch of the 2019 final as winners GEA AM Team Almeria return to defend their title from two years ago, taking on beaten finalists Blue Team (Italy) in group A as well as Hadsten Beach Handball (Denmark), GRD Leça - LOVE TILES (Portgual), Strandepitok Girls BTH (Hungary) and CAIPIranhas (Germany).

The top four teams in each group progress to Saturday’s quarter-finals. 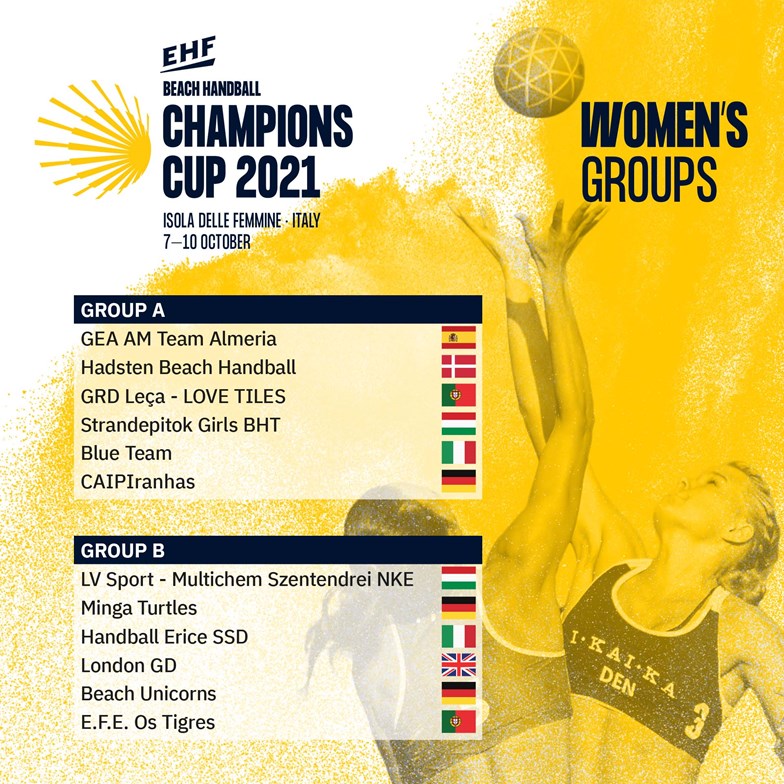 There will be extensive coverage of the competition on eurohandball and the Home of Handball social media channels with daily reviews, photographs and video content such as the top 5 plays of each day and highlights of the men's and women's finals.

Matches from court 1 will be streamed live on the Home of Handball Twitch account throughout the championship, court 2 games will be on the Italian federation's YouTube channel, while matches on court 3 will be recorded and available on demand.

Sunday’s medal matches will be accompanied by a live show on Twitch with EHFTV commentator Chris O’Reilly and Beach EURO 2019 gold medallist Ditte Vind guiding you through the afternoon’s decisive matches.

For full schedule and results, click here for men and here for women.

Previous Article Match of the Week for rounds 4-6 confirmed

Get ready for a new season of ebt action

NEWS: The European Beach Tour 2021/22 season has officially started in November with several updates of the ebt regulations

REVIEW: Spain and Portugal split first-place honours on Sunday, with Malaga winning on the men's side and Leca from Portugal claiming the wo…

Both finals to feature Spanish-Portuguese clashes

DAY REVIEW: the line-up for the finals is complete after tight matches on Saturday, with four teams from the Iberia progressing to the medal…

REVIEW: The women's reigning champions take a loss and gritty performances pay off as some quarter-final spots go down to set-win difference…

Six EHF Champions Cup memories to get you ready for Sicily

NEWS: We turn back the clock on the past events in beach handball’s final European competition of the season