All three participating teams from Europe have made it through to the semi-final of the 14th edition of the IHF Super Globe in Jeddah, Saudi Arabia.

Barça have won the Super Globe every year it has been held since 2017, and five times in total. No other team has triumphed more than twice.

European teams have won 12 of the previous 13 editions, and they seem set for another triumph.

In Wednesday’s quarter-final, Aalborg eased past Al-Wehda FC from Saudi Arabia. Backed by a nine-goal half-time lead (19:10) the Danish side cruised to a 38:27 win despite missing their star arrival Aron Palmarsson.

Last season’s EHF Champions League finalists are the first team from Denmark to reach this stage of the Super Globe. 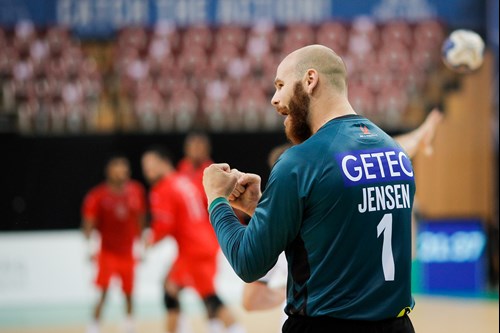 Both other European teams experienced some more troubles.

Magdeburg scored only three times in the opening 15 minutes of their quarter-final against Al Duhail SC from Qatar and soon found themselves behind by up to three goals.

However, the Qatari team could not keep up their level and Magdeburg had already well recovered at the break (16:9) on their way to a 35:23 win.

The Bundesliga side had earned a straight-forward 32:20 (17:12) win over Sydney University in the tournament’s opening match Tuesday.

Title holders Barça also had to overcome an early scare in the concluding quarter-final against Zamalek SC. The Egyptian side were 5:0 up after eight minutes before the Spanish champions gradually found their rhythm.

Barça only enjoyed a minor lead at half-time (18:17) but finished the game four goals ahead: 36:32. Luis Frade with seven and Dika Mem with six were their best scorers.

Barça’s next opponents, Pinheiros, came through the most thrilling quarter-final of the four, as the Brazilian side edged the home fans’ favourites Al-Noor 34:33 (19:16).

Next Article Magdeburg to open title defence against Velenje

REVIEW: Three European teams finished on the podium in the IHF Men’s Super Globe, as Magdeburg secured their first title in the competition

Clash of the European champions in Super Globe final

REVIEW: Barça and Magdeburg will face-off on Saturday, having come through very different routes to the final

PREVIEW: Aalborg and Magdeburg are the other European contenders in the 10-team field for this week’s tournament

OBITUARY: Manfred Prause, who was referee and official in European handball for more than a half century, has died age 81

Become a mobile reporter for the European Handball Federatio…

NEWS: Playing dates and throw-off times for the first 10 rounds of the EHF Champions League Men have been finalised

212 balls set to be opened in big draw event

NEWS: Draws for four European club competitions will take place in Vienna on Tuesday at 11:00 CEST

Barça and Vipers among 2020/21 national champions