The final round of the EHF European League group phase took place on Tuesday, with four Last 16 tickets - one in group C and three from group D - being confirmed.

The next round of action will be on the 29th of March when we will have the first leg of the Last 16.

You have EHF Champions League Men and World Championship qualification to tie you over until then! See you at the end of March for another Live Blog, good night!

GROUP D REVIEW: Kadetten Schaffhausen win by six (32:26) against Tatabanya KC and conquer two important points in the last round of Group D

GROUP A REVIEW: Füchse Berlin lose at home 29:30 after a thriller and finish second

If we cast our eyes past the Last 16, we have some huge, huge, huge clashes coming up with the winners of Nantes vs Füchse playing the winners of Magdeburg vs Sporting. So much to look forward to!

After bringing down one big German side tonight away from home now Plock will be filled with confidence going into their Last 16 clash against Lemgo! And if they manage to get through that round, they play the winner of Sävehof vs Kadetten Schaffhausen. 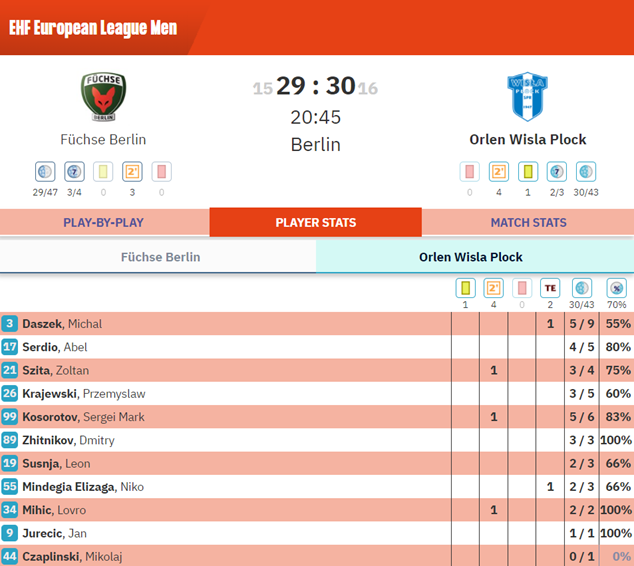 So, we now know all of the Last 16 clashes. And we have some really monster clashes coming up:

And there you have it, a flat performance from La Rioja and PAUC knock them out of the EHF European League. Big shout out to Kristján Örn Kristjánsson who had a super game for PAUC, letting them fly from the back court. The Icelander netted 7 goals and really helped keep La Rioja at bay. Of course, Wesley Pardin with his 11 saves caused the Spanish side huge headaches. 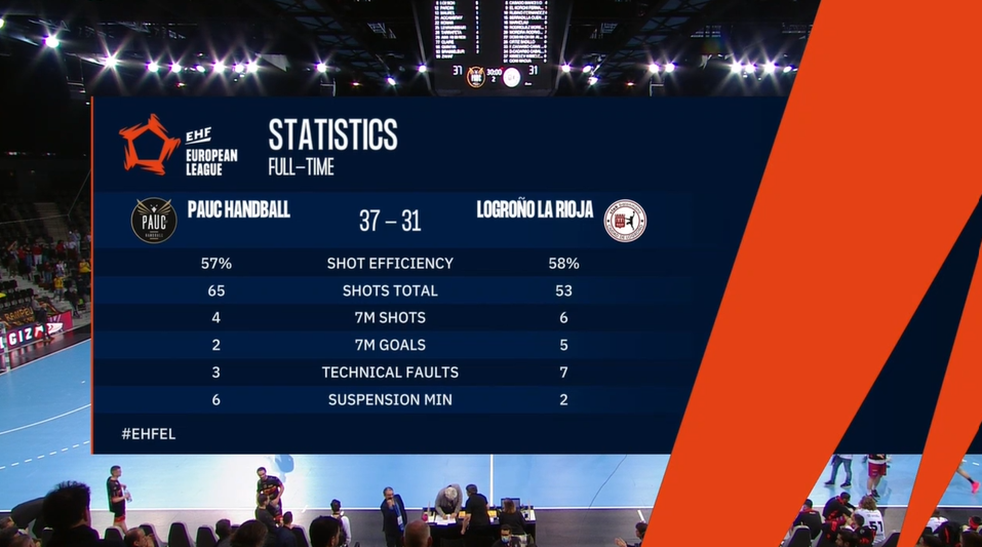 He is up to save number 10 now, that's Wesley Pardin!

It looks like this is proving too difficult for La Rioja to close the gap, they are currently sitting five goals adrift and surprisingly enough they lack somewhat urgency to close the gap. This is not to take away from PAUC who are playing one of their best games this season. It's old head William Accambray who has been most successful in front of goal, he is 6/8 so far. 31:26.

Kristján Örn Kristjánsson comes around the middle block at speed on the back of some nice switches to net a goal into the bottom right-hand corner and with that restores PAUC's three goal lead at the buzzer!

Can they keep up this good work for the second half and deny La Rioja a Last 16 spot?

Game on! Look at this, PAUC with a two-goal lead. As it stands Velenje would progress.

Could that be any more in the top corner? 🎯
Kristján Örn Kristjánsson and @pauchandball making life difficult for La Rioja right now. #ehfel pic.twitter.com/xbELMPpFu4

7:7 at the start of this all-important tie between PAUC Handball & La Rioja!

All eyes are on the PAUC Handball vs La Rioja, if the Spanish side win, they are through - anything less and they are out and Velenje take the spot.

Watch it on EHFTV.com

GROUP B REVIEW: While GOG needed only one point to secure the first spot of the group, the Danish side lost in Lemgo and remain under threat…

GROUP A REVIEW: Both sides will face tough opponents in the European League Last 16

Gorenje with their win now keep their hopes alive for the time being. They will be hoping that PAUC can snatch a point from La Rioja. If so Gorenje will be in the Last 16.

So with that AEK will now not make it to the Last 16 and Pelister are now confirmed second in group D. This means that now Sporting and Kadetten are sure of Last 16 spots but just the finishing order is up for grabs.

WOW! Gorenje leave it SUPER late but squeeze a one-goal win off the Sävehof youngsters. They were down since the score read 18:17 to them, but they stuck in there and in the last 5 minutes they had some luck. Two seperate two-minute suspensions to Pontus Brolin (55 & 58th minute) hurt the Sävehof efforts.

Gorenje are still struggling against Sävehof. And all that versus a Sävehof side which have many of their big names sitting out. 25:21 to Sävehof.

Velenje need to win tonight but the @IK_Savehof youngsters couldn't care less 🤷‍♂️ Elmer Tilly lets it rip from the wing to give the Swedish side the lead again! #ehfel pic.twitter.com/ZHkjNokmQC

Not looking good for AEK at the opening of this second half. They are six down now after a 4:0 run by Pelister.

Massive tension in the Pelister vs Athens, the last 5 minutes of the half took so long to get done with all the stopping and starting. Tensions were almost boiling over at points. Feels like a real cup final. Pelister will be happy with the two-goal lead while AEK will be fighting for survival in the second half. Not looking good for Gorenje who need a win to stay alive.

Lemgo saw it coming but there was nothing they could do to stop Emil Lærke flying through and scoring for GOG! 👀 #ehfel pic.twitter.com/4rkKK7EKkB

🧊 Márton Székely with a big stop for HC Eurofarm Pelister early on in their crucial group D clash against AEK! #ehfel pic.twitter.com/u7DbjwOHXn

If you are watching Eurofarm Pelister vs AEK Athens you will see it is all about the goalkeepers so far. Both men pulling off some big saves. Boukovinas for AEK is on 6 saves from 11 (54%) while Hungarian international Székely is on 50% with his four saves.

Join us now on EHFTV.com for tonight's action!

Eurofarm Pelister (MKD) vs AEK Athens (GRE)
- All or nothing for AEK; Pelister could face Magdeburg, Sävehof or Nexe depending on the results.

IK Sävehof vs RK Gorenje
- Sävehof fixed Last 16 spot; all or nothing game for Velenje. To progress to the Last 16 they need a win and for La Rioja to drop at least a point against PAUC

Kadetten Schaffhausen can finish as high as second place in group D but can also be eliminated, so their star his the nail on the head here... Their match against Tatabanya who cannot progress is up at 20:45 (CET).

Last matchday of the @ehfel_official group stage. With a lot at stake, but we are playing at home!
Let's go guys, Hopp @kadettensh!💪🏻🟠

Just over 40 minutes to go until we throw-off tonight's action. We of course will be keeping an eye on all the games that have a Last 16 ticket at stake but a big focus will be on HC Eurofarm Pelister and AEK Athens at 18:45 CET. It has all the makings of a classic and can have a ripple effect throughout the whole evening depending on an Athens win.

In case you're a visual sort of person and want to see which teams have definitely confirmed where they'll finish in the group phase, and which will find out tonight, this is the roadmap for the EHF Finals, which will take place at the end of May.

Possibly the most important game tonight is between HC Eurofarm Pelister and AEK Athens at 18:45 CET. Athens are fifth in group D, but a win would see them through to the last 16, and put pressure on Kadetten Schaffhausen and Sporting CP who play later on.

Ahead of the match, EHF journalist Adrian Costeiu caught up with Athens line player Ignacio Plaza, who tells us how he has found a second home in Greece. It's well worth a read before tonight's action throws off.

Plaza: “Greece has been my second home”

FEATURE: AEK’s Spanish line player Ignacio Plaza says Greece is his second home. The Greek champions expect a huge game from him in the do-o…

With 11 matches to play tonight there's tons of choice for you - although it's always worth remembering that EHFTV has a handy split-screen option to watch up to four games at once. There are five matches in the early 18:45 CET slot, and six more at 20:45 CET.

After weeks of hotly contested action in the EHF European League Men, the group phase finally comes to an end tonight.

But there are still four places in the Last 16 still to be decided. In group C, it's between RK Gorenje Velenje and BM Logroño La Rioja. Both teams are playing away today. Velenje need both a win against Sävehof and for La Rioja to draw or lose. La Rioja need a win against already eliminated PAUC.

In group D, there are three places available and they'll go to three out of four teams. USAM Nimes know they have topped the group, and Tatabanya are eliminated.

AEK Athens must win in their away match to Eurofarm Pelister as they're currently fifth with eight points to second-placed Eurofarm's 10. If Athens lose, Eurofarm, Kadetten Schaffhausen and Sporting CP will progress. If Athens win, then the last two matches between Kadetten and Tatabanya and Sporting and Nimes could be decisive.

Here's the round preview with more!

ROUND PREVIEW: While 12 teams have already secured their presence in the European League Last 16, the four remaining tickets will be distrib…