The EHF European League Men is heading into the knockout phase of its inaugural season, with the Last 16 throwing off on Tuesday.

Here are the main facts and figures of the competition after the group phase:

0 teams from the same country face in the Last 16, and the same will apply to the quarter-final.

1 coach still in the competition won the EHF Champions League as a coach: outgoing Rhein-Neckar Löwen coach Martin Schwalb, who won with HSV Hamburg in 2013.

1 player who won the last edition of the EHF Cup in 2019 with THW Kiel, can win the EHF European League this season: Lukas Nilsson, who joined Rhein-Neckar Löwen before this season.

2 teams in the Last 16 have started their journey in the first qualification round: CSKA and Fivers.

2 teams did not win a single point in the group phase: Tatabanya and Besiktas.

3 - which means all - German clubs have won their groups.

4 of the Last 16 participants played at the EHF FINAL4 in the past: Chekhovskie medvedi, Rhein-Neckar Löwen, Füchse Berlin and Montpellier HB; only Montpellier won the title, in 2018.

10 of the 111 group matches played ended in a draw; Leon had the most draws: four. 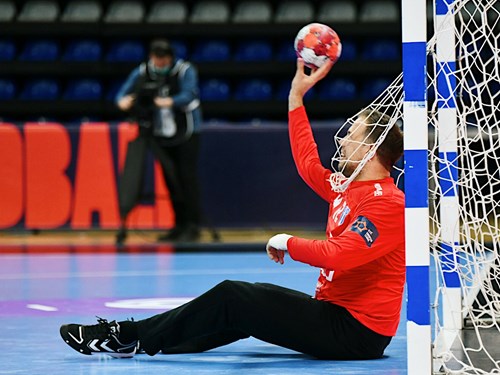 11 group matched ended with a difference of 10 or more goals.

16 was the lowest amount of goals by a team in a group match: Besiktas losing 16:40 to Montpellier.

18 was the highest number of group phase points, gained by Magdeburg, ahead of Löwen (17) and Plock (16).

20 times German clubs won the EHF Cup, including six out of seven times at a four-team finals tournament (2013-2019).

24 goals were the winning margin in the group phase: Montpellier beating Besiktas 40:16.

28 knockout matches are scheduled: 16 in the Last , eight in the quarter-final, four at the EHF European League Finals (23/24 May).

34 goals marked the overall difference between Plock and Metalurg after their two group matches.

40 of the 111 group matches played were won by the away team.

40 was the lowest amount of goals in a group phase match: Pelister vs Tatabanya 21:19.

45 was the highest number of goals scored by a team in an single match: Fivers beating Metalurg 45:30.

49 years is the age difference between the oldest coach of the competition, Vladimir Maximov (Chechov/75) and the youngest, Jaron Siewert (Füchse Berlin/26).

61 of the 111 group matches played were won by the home team.

75 was the highest amount of goals in a group phase match: Fivers beating Metallurg 45:30.

85 goals in total were scored in the two duels between Pelister vs Tatabanya.

89 goals were scored by Emil Jacobsen (GOG), who leads the top scorers list.

Previous Article Kündig stars as Switzerland among sides to progress

Next Article Procedures and criteria for the Last 16

LAST 16 PREVIEW: The EHF European League Men heads into its business end with the first leg of the Last 16 on Tuesday

LAST 16 PREVIEW: The eight quarter-finalists of the EHF European League Men will be determined on Tuesday

COUNTDOWN #17: Grundfos Tatabánya (HUN). The Hungarian side are no strangers to the European competitions but still wait for a big success

Presov have new chance for success