The bottom half of the final standings at the Men's 20 EHF EURO 2022 in Portugal have been confirmed after the conclusion of Saturday's four placement matches.

Iceland are the 12th European team to clinch a spot at the 2023 IHF Men's Junior World Championship, after securing a 45:34 win against Italy, joining Portugal, Spain, Serbia, Sweden, Denmark, France, Hungary, Slovenia, the Faroe Islands, and co-hosts Greece and Germany. 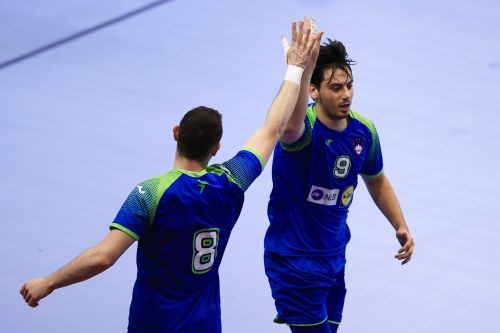 With a place at the 2023 IHF Men’s Junior World Championship at stake, the match between Iceland and Italy was the most important match on Saturday at the M20 EHF EURO 2022. It proved to be the highest-scoring game of the competition, as Iceland tied their record for the most goals scored in a match.

Despite their 10th place in the final standings, it was a successful tournament for the Faroe Islands. Backs Hakon West av Teigum (39 goals), Elias Ellefsen a Skipagotu (29 goals) and Óli Mittun (28 goals) set the competition alight with their superb skills, combining for 41 per cent of their team's goals and setting the standard for when they make the step to the senior national team.

Norway, whose 15th-place finish is their worst in history, and Croatia, who recorded their second-worst finish in the competition, will be surely disappointed with their performances and will try to bounce back in the future.

REVIEW: The two teams join the 12 European nations already qualified for the World Championship in Germany and Greece

Two places for U21 World Championship to be booked

PREVIEW: The last two European places for the 2023 IHF Men's U21 World Championship will be confirmed this weekend

NEWS: Analyses of the seven Younger Age Category events to have taken place in 2022 have been published

'Hand in Hand': Costa brothers approach the top together

NEWS: In a 25-minute film, Sporting’s future stars Francisco and Martim Costa give exclusive insights in their lives

Eight "Respect Your Talent" alumni who can shine in EHF EURO…

FEATURE: The M20 and the M18 EHF EURO tournaments gave us a glimpse into handball’s future, and we are searching for the next best thing thr…

PREVIEW: Motion to change competition formats as well as playing and qualification systems will be tabled at Friday’s Executive Committee me…

FEATURE: With the EHF European League Men season set to begin on Saturday, we look at four young players who might make an impact

FEATURE: After a busy period of Younger Age Category tournaments, we take a look at some of the players who starred this summer