Lemgo return to European stage after a decade away

After 10 years without an appearance in a European club competition, TBV Lemgo Lippe are back on track and will compete in group B of the EHF European League Men.

In qualification round 2, Lemgo beat Icelandic club Valur in both legs. However, Lemgo, who have won three European club titles, were drawn in an extremely tough group that includes HBC Nantes, SL Benfica and GOG.

Most important question: Can Lemgo proceed to the knockout stage?

"This is an extremely tough group, but we are ready to take the challenge of facing some of Europe’s strongest teams," said coach Florian Kehrmann after the draw. But Lemgo’s problem is that they have not played any European matches since 2011.

Many players – such as the Spanish Guardiola brothers, Swedish World Championship silver medallist Jonathan Carlsbogard and Icelandic wing Bjarki Mar Elisson – have gained international experience with their national teams and former clubs. It will be thrilling to see how they function as a team, particularly as Lemgo have not been among the best six German clubs in recent seasons.

"For us, it is a new experience to take part in an international competition. We have to get used to it very quickly. If we do so, we have a good chance to reach the do-or-die-matches," said team captain Andrej Kogut, son of former Russian international Boris Kogut.

In certain positions, like with Elisson on the left wing, Gedeon Guardiola in the centre block or new arrivals Lukas Hutecek and Carlsbogard at left back, Lemgo are extremely strong. In others, they lack experience – such as in goal with their goalkeeping duo of Peter Johannesson and Finn Zecher.

Lemgo's hopes were higher before the group phase draw than afterwards. But manager Jörg Zereike is still confident: "We want to go as far as we can. Anybody can be sure that the coach, team and staff will give their best to be as successful as possible."

The whole club is eager to show their face in an international competition again. "We have not been in this competition – which we won twice in 2006 and 2010 – for about 10 years. Being a part of it now is a milestone for your club," said Zereike.

Team captain Andrej Kogut hopes for a boost from the stands: "Our biggest motivation this season is to play in front of full halls and many spectators. We are very glad that our fans can be back in our arena."

Kogut also knows that "it is quite difficult to name favourites in this European League season because there are many teams on a high level. Much will depend on the daily form of the teams." 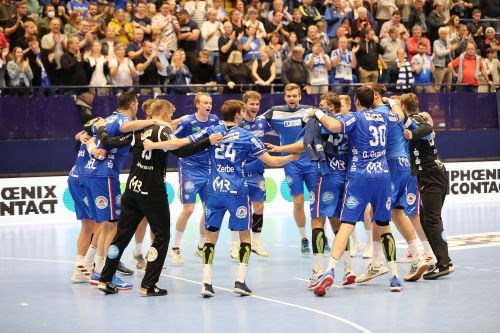 Under the spotlight: Gedeon Guardiola

Gedeon Guardiola's story is fascinating, as he left Rhein Neckar Löwen after eight years to join Lemgo – and in his first season he won the German Cup and qualified for the European League again.

At Lemgo, Gedeon is reunited with his brother Isaias, with whom he left Spain to start a new career in Germany. Despite his age, the two-time EHF EURO winner and former world champion is still among the best defenders in the world, and he finished his national team career this summer with a bronze medal at the Tokyo 2020 Olympic Games.

Between 1995/96 and 2010/11, TBV Lemgo Lippe did not miss a European club season. During this period, they played in the EHF Champions League, EHF Cup, Cup Winners' Cup and the Champions Trophy.

Lemgo won three European titles and their best Champions League result was reaching the semi-finals in 1997/98, when they were eliminated by subsequent winners FC Barcelona. In 2003/04, eventual champions Celje Pivovarna Laško beat Lemgo in the quarter-finals.

For half of his life, 44-year-old Florian Kehrmann has been a part of TBV Lemgo Lippe. After arriving at the club as a player in 1999, aged 22, Kehrmann has not left the club.

He began his coaching career in 2013 as coach of the second team and became head coach of the Bundesliga team in 2014.

Winning the German Cup in June was Kehrmann's first trophy as a coach. The five-time major international championship medallist is a club legend.