Last season was quite successful for Chekhovskie Medvedi, as the perennial Russian champions not only defended their domestic title but had solid results in Europe. Over the summer, the ‘Bears’’ squad has undergone some changes, yet the team coached by Vladimir Maximov hope to take another step in their development.

After many years of underperforming in the EHF Champions League, the Russian team did a decent job in the EHF European League Men 2020/21. Following progression from the group, they eliminated France’s USAM Nimes Guard in the Last 16 and fought hard against Rhein-Neckar Löwen in the quarter-final, narrowly winning the first-leg game at home before losing by 10 goals in Germany.

But can the Bears go even further and reach the EHF Finals? Of course it will be difficult, but nothing is taken for granted for Maximov and his players, who are confident enough to believe in a successful performance. Although Medvedi lost key back court players Sergei Mark Kosorotov and Dmitrii Kiselev, they still have a competitive squad and have also welcomed back right wing Daniil Shishkarev, who should play an important role.

Under the spotlight: Daniil Shishkarev

The 33-year-old Russia national team captain returned to Chekhov after seven years abroad, including six seasons at Vardar and one at Veszprém. The two-time EHF Champions League winner with Vardar (in 2017 and 2019) has plenty of experience under his belt, and his leadership qualities and impact on and off the court should help Medvedi to further grow as a team.

Shishkarev is confident that the Bears can perform at least at the same level as in the last season — and hopefully even better.

“I think we are able to reach the quarter-final again, but it’s a minimum task. The maximum task is to try to squeeze into the final four,” Shishkarev told handballfast.com.

“The main goal this season is to perform well and make it to the EHF Finals. Participation in the European League is not only prestigious for the club, but also provides players with more experience,” said Maximov, who is both the head coach and the president of the club. 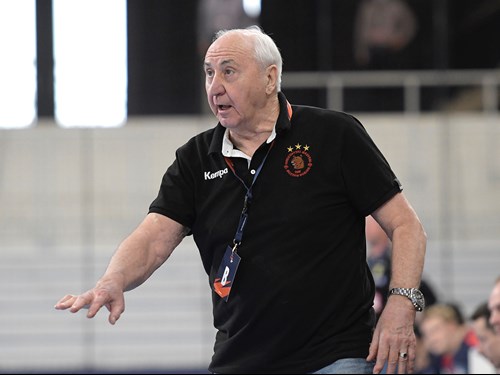 In December 2021, Medvedi will celebrate their 20-year anniversary, and the legendary Maximov has been working with the team all this time. The 75-year-old coach, who has led the team to numerous titles, is living history of Russian handball. Despite the rumours that he might step down as a coach to focus on his duties as club president, Maximov stayed in his position and hopes to add more trophies to his collection.

Medvedi, who heavily rely on domestic players, have a nearly all-Russian squad, with the exception of two Belarusians: centre back Artsiom Kulak and left back Andrei Klimavets.

Notably, 20-year-old Klimavets, who joined the Russian team from domestic rivals CSKA in summer, is a nephew of another Andrei Klimavets — a Belarusian who played in the Bundesliga for many years and won the World Championship with Germany in 2007 after changing citizenship.

Previous Article Amorim: Everything has been great — better than expected

Next Article Ole Rahmel: First a shock, now the chance

GROUP D REVIEW: AEK Athens win by eight at home (34:26) and get the first points in the EHF European League

GROUP B REVIEW: With 39 goals, the Danish side proved unstoppable for Russians