55 straight victories across four competitions: 2021/22 has been a perfect season for SG BBM Bietigheim, as the team of head coach Markus Gaugisch won the EHF European League as well as the German Bundesliga, cup, and Supercup. Back in the EHF Champions League, Bietigheim hope to finally deliver in Europe’s top flight as well.

Most important question: Will Bietigheim return stronger to the top level after one year away?

In their last two appearances in the EHF Champions League, in 2019/20 and 2020/21, Bietigheim only took two victories and one draw in 20 group matches. But the squad has since changed significantly and was bolstered with players such as Kelly Dulfer or Veronika Mala.

The perfect EHF European League season 2021/22 proved their new international strength, and now the whole club is eager to show improved performances in the EHF Champions League, too.

Playing 14 group phase matches instead of six in the EHF European League certainly puts an additional pressure on Bietigheim, who are the hunted team in all domestic German competitions as well. But with a wider squad and more international experience now, Bietigheim’s aim is to make it at least to the knockout phase.

Then, everything seems possible and Bietigheim might even have a chance to become the first German team at the EHF FINAL4 in Budapest.

Under the spotlight: Markus Gaugisch

“I will spend 24 hours per day with handball, but I can stand the pressure and the heat,” was Markus Gaugisch’s reply when asked how he was going to combine his coaching jobs at Bietigheim and the German national team.

In April, the former Bundesliga player was appointed new head coach of the national team and he will work in double duty this season, before solely focusing on the German national team from June 2023. 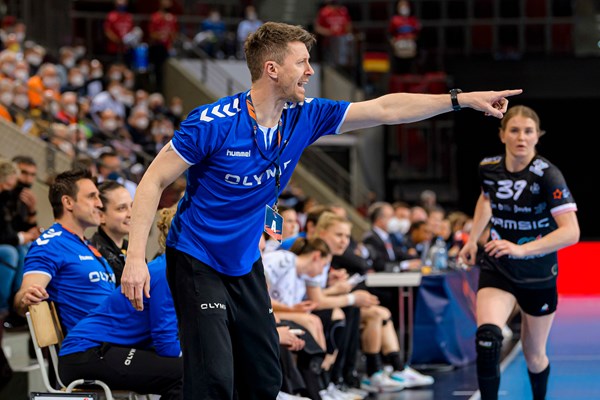 Before that, Gaugisch eyes success in two EHF competitions: the EHF Champions League with Bietigheim and the Women’s EHF EURO 2022 with Germany.

Humble, but ambitious. That is the motto at the German and EHF European League champions ahead of their return to the EHF Champions League.

“Participating for the fifth time, we want to take the next steps on the highest level with our well-established team. We are starting this season with a lot of self-confidence and, if possible, we even want to go all the way to Budapest,” says manager Gerit Winnen.

“To be back in the EHF Champions League is hugely important for our club. The whole team, the region, our fans, and sponsors are looking forward to the matches.”

“Being part of the EHF Champions League is of course a motivation for the upcoming season. We had an amazing last year, now we are motivated for getting better every day and to duel with the best. We did not play EHF Champions League for one season, so I am really looking forward to every match,” the Belgian-born German international says.

What the numbers say:

30 – it took 30 years for a German team to win EHF’s second-tier women’s competition. In 1992, even before the start of the EHF competitions, SC Leipzig won the IHF Cup. In 2022, Bietigheim crowned their 12-match winning streak win a 31:20 final victory over EHF Finals hosts Viborg HK.

Bietigheim’s previous best result in Europe was reaching the final of the EHF Cup in 2016/17, which they lost to Rostov-Don.

Bietigheim remained unbeaten in their first three EHF Champions League matches against current titleholders Vipers. In the 2017/18 group phase, they beat the Norwegian side twice; in the 2018/19 group phase, they tied the first match at Kristiansand – but Bietigheim have lost the next three matches since against the team they will face again in the 2022/23 group phase.

Previous Article Meet the stars of the YAC summer 2022

GROUP A REVIEW: CSM Bucuresti rescued a point against Bietigheim in the dying seconds of the game after Malin Aune scored with five seconds…