Croatia returned to the throne in the men's event Sunday following a 2:0 victory in the final against Denmark, the team that had won back-to-back European titles in 2019 and 2021.

The result meant that Croatia are still the only European team to have lifted the world championship trophy – actually, only two other nations have done so in the previous eight editions of the competition: Egypt won the inaugural championship in 2004, while record champions Brazil won five of the next seven tournaments.

Croatia vs Brazil had been the final of the last three World Championships, but the defending champions from South America saw their road to yet another final appearance blocked by Denmark in the semi-finals. The Scandinavians came back from losing the first set and took the second by a single point before winning the shoot-out 7:4 for a 2:1 victory.

Greece had never been to the semi-finals before, but even came within a set from reaching the final on home sand this time, winning the opening set of their semi-final but ultimately losing in a shoot-out to Croatia.

Croatia’s Lucian Bura was the top scorer with 164 points and was also named MVP of the tournament. 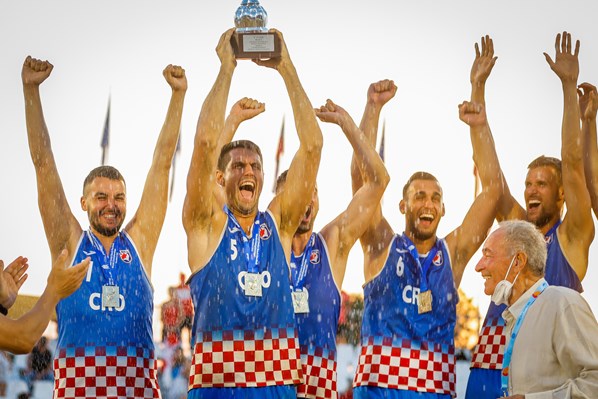 Germany proved in the women's event that the European title they won last year by dethroning Denmark was no fluke. The team went through the tournament without dropping a set, highlighted by a stunning 26:14, 16:4 victory over two-time world champions Brazil in their preliminary round opener.

The result set the tone for a flawless campaign by the Germans, culminating in a 2:0 victory over 2016 world champions Spain in the final – after two very close sets: 15:14, 22:20.

Germany won silver in the past – losing the 2006 final to Brazil – but had failed to make it back to the semi-finals since.

NEWS: The trophy for the Beach Handball Champions Cup has been unveiled ahead of the October competition

Beach champions back to defend their titles

The reigning champions will be aiming to retain their EHF Beach Handball Champions Cup titles, but they won’t have it easy in Madeira

NEWS: EHF Expert for Beach Handball Alexander Gehrer is one of the authors of a new book that aims to assist newcomers with their introducti…

REVIEW: European nations were victorious in the men's and women's beach handball events at the World Games 2022

REVIEW: Both the men’s and women’s team beat Spain in the final of the Beach Handball EURO in Prague

Summer blog: Austrian-Czech final in Varna; Crunch time at b…