The 16 participating teams can step up their preparations for the start of the EHF European League Women 2021/22 group phase in January.

Since the draw at the EHF office on Thursday, all teams know which three opponents they are going to face in an attempt to qualify for the quarter-final and, ultimately, the EHF Finals Women 2022.

With several countries having  more than one team in the mix – France and and Romania both boast three teams; Denmark, Hungary and Norway all have two sides – the country-protection rule applied to the draw, avoiding that teams from the same country would end up in the same group. 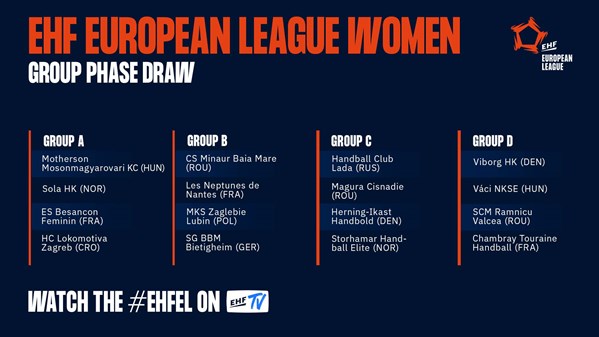 Nantes and Baia Mare played a spectacular semi-final against each other at the EHF Finals last May, with the French side narrowly prevailing 36:34 in the end.

Completing this group B are MKS Zaglebie Lubin, which means that the wish from Polish Nantes goalkeeper Adrianna Placzek, to play against the team from her home country, has come true.

In group A, European club competition newcomers Motherson Mosonmagyarovari KC from Hungary face Sola HK, the Norwegian team around one of the most decorated players of Norwegian handball, Camilla Herrem. Sola return to European duties after 15 years, and made it to the group phase also courtesy of 19 goals of Herrem.

ES Besancon Feminin from France and HC Lokomotiva Zagreb, the Croatian side who reached the final of the EHF European Cup last season, are completing the line-up.

Group C also brings together some big-name contenders. Handball Club Lada, former winners of the EHF Cup and Cup Winners’ Cup and finalists of the EHF Champions League, have two Scandinavian opponents: last season’s EHF Finals participants Herning-Ikast Håndbold from Denmark as well as Storhamar Handball Elite from Norway, with one of the three Romanian teams still in the competition, Magura Cisnadie, also in this section.

Group D features one of the most decorated teams in European women’s handball, multiple Champions League, EHF Cup and Cup Winners’ Cup trophy holders Viborg HK. The Danish side have two trips to Eastern Europe coming up – to Váci NKSE in Hungary and recent DELO EHF Champions League contenders SCM Ramnicu Valcea in Romania. Chambray Touraine Handball from France is the fourth team in this group.

The first round is scheduled for 8/9 January and the group phase will conclude on 20 February. The exact playing schedule will be announced in due time. The top-two teams from each group advance to the quarter-final in the last weekend of March and the first weekend of April.

Next Article The favourites shine to close round 8

Berlin the only team with fourth victory

GROUP A REVIEW: Füchse easily take the points at Presov to strengthen their top position