Eckerle: “We are not travelling to Budapest as tourists”

She has been one of the keys to Team Esbjerg’s premiere at the EHF FINAL4 in Budapest. In the second leg of the quarter-final against CSM Bucuresti, goalkeeper Dinah Eckerle was a cornerstone for the 27:27 draw, saving 10 shots in the second half. After Esbjerg won 26:25 in Bucharest, the draw on home ground was enough for them to become the second Danish club to qualify for the EHF FINAL4 after FC Midtjylland at the maiden edition in 2014.

And like for FCM in 2014, a German goalkeeper is part of the Danish team — then it was Sabine Englert, now it is Dinah Eckerle. Eckerle travelled quite a winding road to arrive in Denmark. Iin 2020, she moved from newly crowned European League champions SG BBM Bietigheim to Hungarian club Siófok, but after some months, Eckerle’s next stop was Metz Handball until the end of the 2020/21 season.

With Metz, Eckerle missed the qualification for Budapest due to a quarter-final loss to finalists Brest Bretagne, but at that moment, her contract at Esbjerg had already been signed. Eckerle is now the third German goalkeeper after Englert and Champions League 2014/15 winner and EHF FINAL4 2015 MVP Clara Woltering (with Buducnost) to be part of this event and the fifth German player overall (besides Xenia Smits and Anja Althaus).

“I did not even know that. I thought many more German players had made it to Budapest, but this fact makes me even prouder,” says Eckerle. Currently her team are fighting for the Danish championship title, facing Odense in the league finals, but their anticipation for the EHF FINAL4 has been high for weeks. “We cannot wait to play there,” says Eckerle.

Looking back on the EHF Champions League 2021/22 season, the 26-year-old goalkeeper is sure that Esbjerg deserved to make it to the final tournament: “Though we could not expect to go all the way at the start of the season, we played quite consistently, losing only one group match at Brest, and finally won the group. But honestly, our group was easier than the other one, which you can see in the composition of the EHF FINAL4 with three teams from that and us from the other group.”

After skipping the play-offs, both quarter-finals against CSM were on the edge, “but when the final whistle of the second leg was blown, we were so happy that finally we made it,” says Eckerle. After one season in Denmark, she believes that the general level of the Danish league is higher than in Germany, France and Hungary: “You have to be on 100 per cent in every match, as you can lose against any opponent. But this made us stronger for the Champions League.”

After one year at Esbjerg, Eckerle loves the club and the city. “Definitely, I chose the right club,” she says.

Eckerle has not only been impressed by the club and the league, but her Norwegian teammates: “It is incredible how they live and love handball, how much they invest, how much passion they put in their sport, in every training. All the results from the Norwegian national team in the past decades prove this effort and dedication. It is not a miracle that they won so many trophies.” 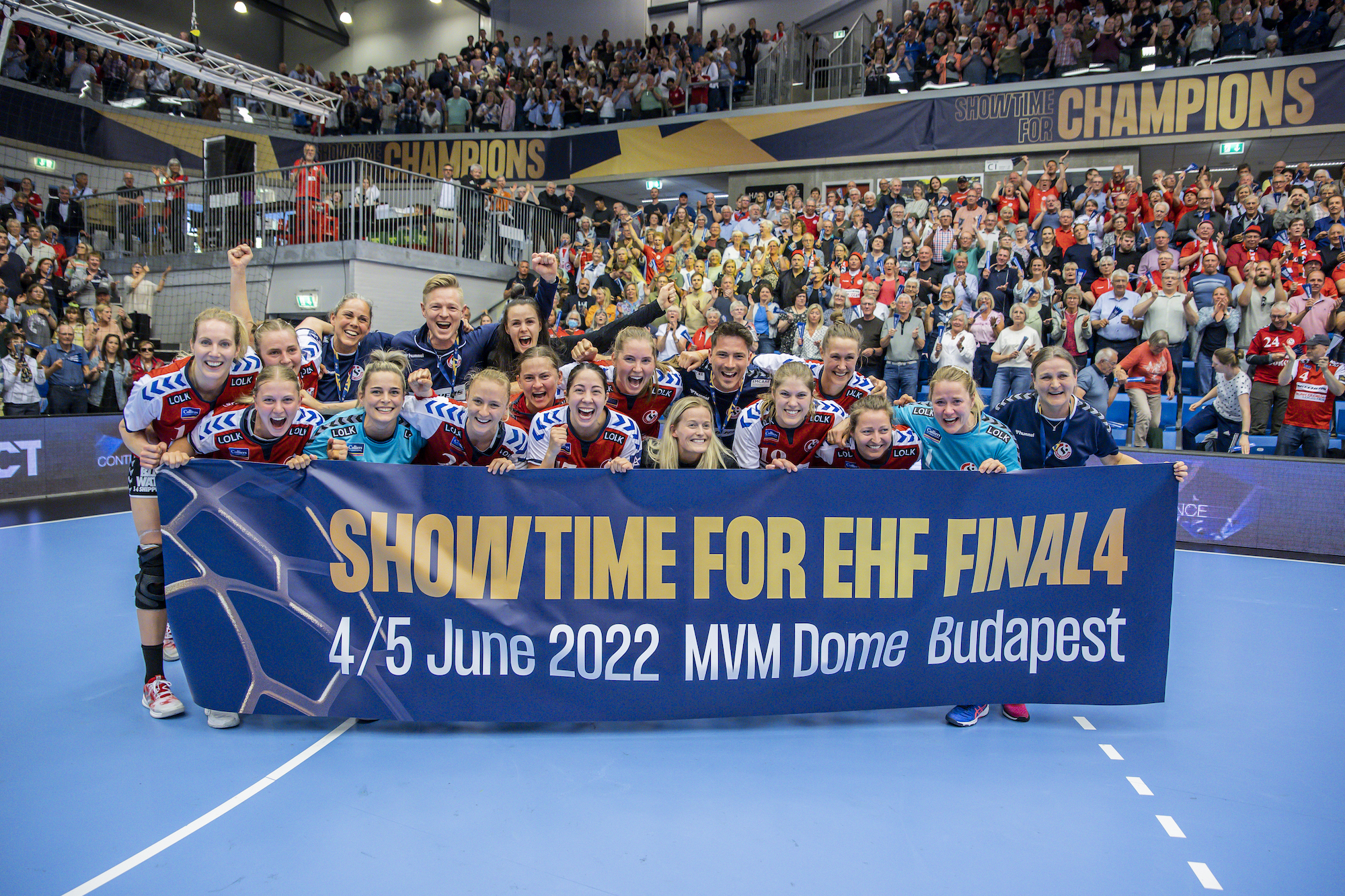 Györ are not unbeatable, not even in Budapest, though they have won almost every match of this season and can count on individual class and depth in their squad like maybe no other team. But we do not travel to Budapest as tourists, but as contenders for the final. We want to prove that we deservedly made it to the EHF FINAL4. We can beat them.
Dinah Eckerle
Team Esbjerg goalkeeper

In Budapest, many Norwegians will be on court — not only for defending champions Vipers, but also in the squad of Esbjerg’s semi-final opponents Györ.

“We watched the draw event and we were sure that we would have to face the hardest possible opponent. This draw, funnily enough, was no surprise for us. We will face a green wall of Györ fans in Budapest arena, and none of us had experienced an atmosphere like we will expect at this match. I have not been part of an event like this — with the national team nor on a club level. It will be cool and a lifetime experience, I am sure,” says Eckerle.

But despite her team being recognised as the underdogs in this semi-final, the Esbjerg goalkeeper is confident.

“Györ are not unbeatable, not even in Budapest, though they have won almost every match of this season and can count on individual class and depth in their squad like maybe no other team. But we do not travel to Budapest as tourists, but as contenders for the final. We want to prove that we deservedly made it to the EHF FINAL4,” concludes Eckerle. “We can beat them. The daily form is crucial. It is all about remaining cool and preparing for them in a perfect way.”

Next Article How to follow the EHF Finals Men