Danish handball made a strong comeback among the top four teams of the EHF Champions League Women after eight years, when Team Esbjerg sealed an EHF FINAL4 spot last season. In 2022/23, Danish champions Odense Håndbold are aiming for a repeat of that feat.

Odense made the knockout phase each time they played the EHF Champions League in the past – but they have not been to Budapest so far.

They hope the 2022/23 season, which will mark their 50th match in the competition, will change that.

Most important question: Can they translate their domestic league form to the EHF Champions League?

Last season, Team Esbjerg became the first Danish team to qualify to the EHF FINAL4 after eight seasons, dominating their opponents on the way to Budapest. However, Esbjerg conceded two losses in the three matches of the final against Odense, as the latter side’s crucial, nail-biting, 25:24 win, made them champions for the second consecutive season.

However, Odense have failed to consistently produce the same level of handball over the past two seasons in the EHF Champions League Women, being eliminated in the play-offs by Vipers Kristiansand and Brest Bretagne Handball.

Their challenge will not be eased by two prominent absences at the start of the season, as Dutch backs Lois Abbingh and Larissa Nusser will miss the first months due to pregnancy and a knee injury, respectively.

Therefore, a side that is already stretched thin will find it difficult to compete on two very engaging levels, yet their ambitions are high. Play-offs will be a must for a team that won the Danish league, but Odense, with the experience of three appearances in the knockout phase in the past four seasons in the EHF Champions League Women, eye to finish on the top two places to qualify directly to the quarter-finals.

Facing reigning champions Vipers Kristiansand, Hungarian powerhouse FTC-Rail Cargo Hungaria, French outfit Brest Bretagne Handball and an ambitious CSM Bucuresti in the group phase will be difficult, but Odense must prove that they belong in the top also in European competitions, not only in the Danish league.

One advantage might also be the chemistry of the side, with only three players in and two out during this summer, which can definitely play in Odense’s favour.

Under the spotlight: Dione Housheer

Playing alongside Dutch national teammates Larissa Nusser and Lois Abbingh had a huge impact on Housheer in her first season at Odense, helping the 22-year-old right back settle in immediately, after spending the previous three seasons in the Danish league at Nykøbing Falster Håndboldklub.

Housheer, who was named the All-star right back in the Danish league last season and the MVP at the European Open in 2016, has plenty of potential and delivered instantly, continuing her superb run of form after being crowned world champion with the Netherlands in 2019, when she was only 20 years old. 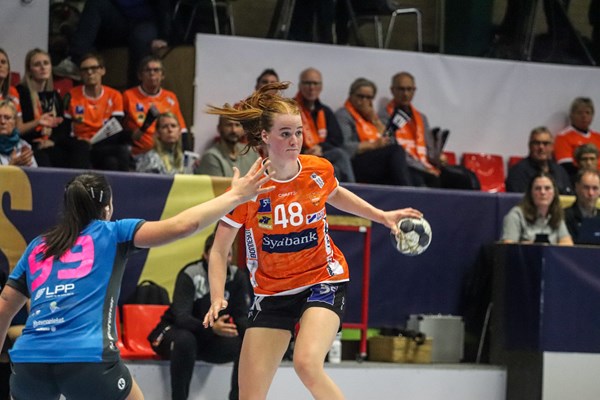 Being the only left-handed right back in the squad will add some pressure on her, as the number of minutes Housheer will feature is due to grow, but this can only help Odense get the best of her.

The Dutch back scored 79 goals in her first EHF Champions League season – which ended after the play-offs – so Odense will count on Housheer’s shooting prowess in 2022/23 again.

As a team which is trying to get to the top, soaking in the experience of the EHF Champions League Women as a sponge and then using it to become a better side and a mainstay in the European premium competition.

“Our main goal is to advance from the group phase. Our dream is to end first or second in the group, so we qualify directly for the quarter-finals. However, we know that we ended up in a tough group with strong teams that have the same ambitions as we do,” says Trine Nielsen, former player (2011-13) and current sporting director at Odense.

What the numbers say:

50 – this season, Odense will become the 25th team in the history of the competition to have played 50 games in the EHF Champions League. The milestone will be reached in round 4, when they are scheduled to host CSM Bucuresti.

Next Article Five takeaways from the intense M18 events