Presov have new chance for success

TATRAN Presov have been the top club in Slovakia for many years, but in the last couple of years they have struggled in European competitions.

Most important question: Can Goluza's team make it to the knockout stage?

TATRAN Presov's significant changes to the squad in the last two seasons have been reflected in their results. Nevertheless, the Slovakian champions can be a hard nut to crack when they play at home. In their second consecutive season in Europe’s second tier, Presov will do their best to advance from the group phase after finishing sixth in group B in 2020/21.

"We look forward to bringing European handball back to our fans — that’s our biggest wish this season. On the objective, we want to win more points than we did last season and we want to fight for the knockout position," said team manager Miroslav Benicky.

Presov did some serious scouting and made a few surprising signings. The line will be reinforced by Viacheslav Kasatkin, Slovenian goalkeeper Tilen Leban will aim to make many saves, left wing Sergio Lopez joined from Cuenca and Valentin Kuran is the new centre back. The club has full faith in their interesting mix of players.

The Slovakian side made an early start to preparations for the new season but had to face injuries to important players like Oliver Rabek, Pedro Pacheco, Dominik Krok and Roman Tsarapkin. With four new names in the squad and missing some of their important players, coach Goluza may not have had enough time for the perfect tune-up.

"We are excited to play difficult matches against quality teams from around Europe. This is a big motivation for all the players, to experience high-level handball. We can’t wait to see our fans again and to play European handball for them after a long time," added team captain Oliver Rabek.

Under the spotlight: Oliver Rabek

Team captain Oliver Rabek has been almost synonymous with the club. He has represented the team in European competitions for the last nine years. He is always an important link in the team’s back court and has a great combination of experience and high-speed shots. 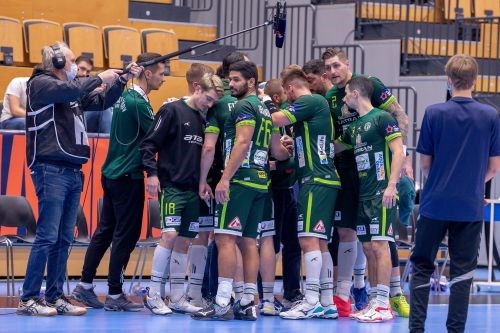 Last season was difficult for TATRAN Presov as they faced many challenges. The team will give their best on the court this season to meet the objective of performing better than last season.

"We had a chance of progressing in the competition last season too, but we were held back by injuries and quarantines. I believe if we stay healthy this season that we can achieve much better results. We want to qualify for the knockout stage. For me, Bundesliga teams are always top-quality teams in this competition," said Rabek.

Players from nine different countries are part of TATRAN Presov's squad this season. Alongside Presov's many homegrown players, fans will be able to watch players from Portugal, Brazil, Slovenia, Russia, Belarus, Spain, Cuba and Tunisia.

Next Article Every youngster a winner at Wroclaw Handball Cup

COUNTDOWN #17: Grundfos Tatabánya (HUN). The Hungarian side are no strangers to the European competitions but still wait for a big success

COUNTDOWN #20: Cocks (FIN). The Finnish team have won 12 domestic championships in 15 years, and now hope to bring that success to the conti…

DRAW PREVIEW: The draw of the 12 ties for qualification round 2 takes place on Tuesday at 11:00 CEST

REVIEW: All teams for the next qualification round have been confirmed, with the draw taking place on Tuesday at 11:00 CEST