Edwige: “We must own up and take responsibility”

Béatrice Edwige and FTC-Rail Cargo Hungaria want to use Saturday's Match of the Week against Brest Bretagne Handball to bounce back from their stunning 20-goal defeat in the EHF Champions League Women 2022/23 last week.

Spanning nearly two decades, Béatrice Edwige’s career has been marked by success. The line player and defensive specialist has been a domestic champion in her native France four times, made the hat-trick of medals with the national team at the EHF EURO, the World Championship, and the Olympic Games, and was the All-star defender at the EHF EURO 2016.

However, Edwige did not expect the largest defeat in her handball career to come just at the start of the EHF Champions League season.

“I have never in my life lost a game by a margin of 20 goals,” says Edwige, after her FTC-Rail Cargo Hungaria slumped into a 40:20 loss at SG BBM Bietigheim in last round’s Match of the Week.

It was an astonishing loss for the Hungarian powerhouse, their largest ever in the EHF Champions League. It made them go back to the drawing board ahead of another tough clash, another Match of the Week, against Brest Bretagne Handball – on Saturday at 16:00 CEST (live on EHFTV).

“There were many fans coming from Hungary to support us in that game, in their own time and for their own money. Therefore, what we showed on the court is unacceptable. We did not only lose the game, we lost ourselves. So, that was very, very tough to understand and a bitter pill to swallow,” says Edwige, who joined FTC in March 2022.

“The main thing we learnt from that loss is that we must own up and take responsibility for our own actions, because this is the only way we will be going forward. It is difficult, it needs work, but it can be done.”

At 33, Edwige has seen it all in handball, playing in her eighth EHF Champions League season for different sides, including Metz Handball, Györi Audi ETO KC, and Rostov-Don.

FTC started the season with a confident win at home over Odense Håndbold. But such a defeat like the one at Bietigheim is very difficult to follow up with another win, despite the experience on display in FTC’s roster, with players like Andrea Lekic, Dragana Cvijic, Szandra Szöllosi-Zácsik, or Angela Malestein.

“There have been a few players coming in this summer, therefore we need to work on our chemistry in the squad and the most important thing, from my point of view, is to be pragmatic and understand why difficult moments come in the game and how to negotiate them,” Edwige says.

“This is very important and can be a huge factor in getting better and better throughout the season, which will be long and difficult.”

A moral reparation has been on the cards after a domestic league win on Tuesday against Érd HC, 34:28, but the main objective this week is of course the Match of the Week against Brest – team that has started the season with two defeats. 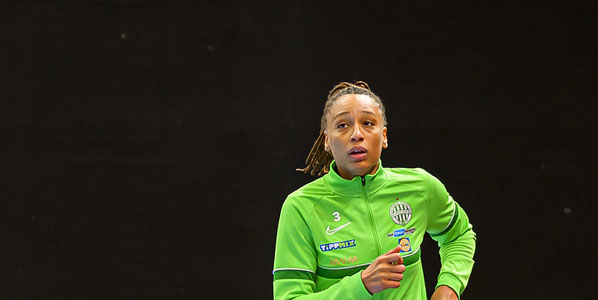 There were many fans coming from Hungary to support us in Germany, in their own time and for their own money. Therefore, what we showed on the court is unacceptable. We did not only lose the game, we lost ourselves. So, that was very, very tough to understand and a bitter pill to swallow.
Béatrice Edwige
FTC-Rail Cargo Hungaria line player

Is it a special match for Edwige, who has been born in Paris and played in France until her move to Györ in 2019?

“I would like to say it is a special game for me, but the feelings are mixed. Sure, whenever I travel to France to a play a club team, it is a bit special. But right now, I am playing for FTC and we just want to win against whatever opponent we face. This week, it is Brest,” Edwige says.

“They have a very good squad with players I know very well, like Cleo (Darleux), Coralie (Lassource), Pauline (Coatanea), Alicia (Toublanc) or Pauletta (Foppa), but they also made some changes in the squad and have (Djurdjina) Jaukovic back from injury. All in all, I think it is going to be an interesting and tough match.”

The French line player still circles around the elephant in the room: the loss against Bietigheim. Such a loss will always leave marks in the squad, but the key is overcoming all issues and setting up a good vibe before the next game.

Whether that happens or not, it will surely be crucial in one of the most important matches of FTC this season. As Edwige points out, a team needs to get back on track as soon as possible, proving their mettle in difficult situations.

But can the current FTC squad do that? It is imperative as the Hungarian powerhouse is still eyeing its maiden EHF FINAL4 berth, which would mean the world for the squad and for the fans, especially as the business end of the tournament will be hosted once again at the MVM Dome in Budapest.

“It would be amazing, sure. But, first of all, we need to be back at our level, to remember what we can do as a team, and focus to get back on track,” Edwige says.

“Remember those fans that came to Bietigheim, we have a moral duty to them to prove that accidents can happen.”

Settling in a new team can easily be problematic, especially mid-season, but it was not an issue for Edwige when she arrived in March 2022.

There was no question she was going to be fine, especially as she had already played for two seasons in Hungary, for Györ.

But this is another challenge.

“It is always nice to see another league, to settle in, to learn more about the teams, their rhythm, how they play,” Edwige says.

“I feel very good here, we have some amazing fans, so I hope everything will turn out fine result-wise.”

Next Article PAUC aiming for more in fresh campaign

GROUP A REVIEW: Brest Bretagne Handball sealed a critical win over FTC, 24:21, with a dominating performance throughout the whole match