Race to the quarter-final going down to the wire

UPDATE: This article has been updated on Friday 18 February at 15:45 CET with the cancellation of the match between Krasnodar and Drammen on Saturday.

Five ties in the EHF European Cup Men 2021/22 Last 16 are still wide-open heading into the decisive second leg this weekend.

After those matches in the first leg ended with a difference of four goals or less, the teams involved have everything to play for when the line-up for the quarter-final will be determined.

Among the close ties is the only national derby in the Last 16, in Russia: HC Victor defeated SGAU-Saratov 30:27 last week and they hope to finish the job in the home leg in Stavropol on Sunday. 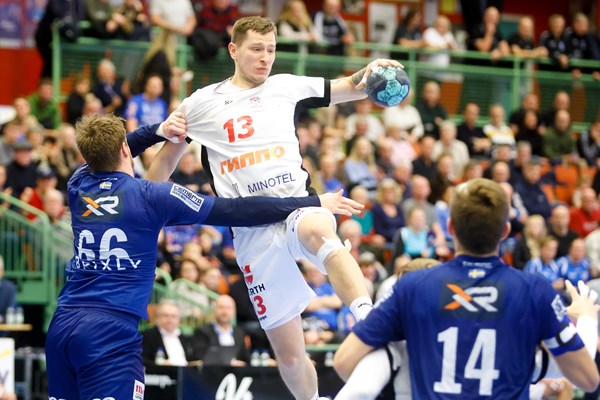 Since the draw was made in December, the tie between the two former EHF Challenge Cup winners IFK Skövde HK and SKA Minsk has been seen as one of the highlights of the Last 16. And the first leg in Sweden lived up to that billing last weekend as the teams played to a 26:26 draw.

Minsk have the home right in the second leg on Sunday. While they hope to make the step into the quarter-final, visitors Skövde might arrive in Belarus boasted by the fact that several key players who missed the first leg are now back with the team.

Previous Article Statement on handball matches in and around the Ukraine

Next Article Nantes hope to squeeze into quarter-final

ROUND REVIEW: Seven quarter-finalists have been determined after the Last 16 matches held on Saturday and Sunday

SEMI-FINAL PREVIEW: Baia Mare and Drammen want to reach the final, but Alingsås and Nærbø are not planning to throw in the towel

SEMI-FINAL REVIEW: The homes sides were victorious in the first leg encounters, but their rivals will hope for a strong comeback next weeken…

Drammen and Alingsås through after away wins

FINAL PREVIEW: The Romanian side chase a four-goal deficit against the debutants from Norway in the second leg on Saturday

NEWS: Footage of both duels between Nærbø and Baia Mare to be broadcast throughout Europe – and beyond

FINAL PREVIEW: The surprise package from Norway hosts their experienced opponents from Romania in the first leg on Saturday

FEATURE: A lifetime spent at Baia Mare could be the key for Calin Cabuț when CS Minaur host Nærbø in the second leg of the EHF European Cup…