Fans have given the EHF Champions League Men All-star Team a refresh in 2020/21, with only three players from the 2019/20 cohort returning to the selection and four making their first appearance in the lineup. In all positions but two the race was extremely tight — current world champions Niklas Landin and Mikkel Hansen garnered over 30 per cent of the vote for their respective positions.

The final selection of 10 names came from 210,000 votes cast by fans, based on nominations partly from the competition’s coaches, All-star Team sponsor Gorenje, and EHF media. The All-star Team is comprised of one player per on-court position, plus best defender, best young player (under 23) and best coach. All but one member of the 2020/21 All-star Team — Landin — will be on court in Cologne. 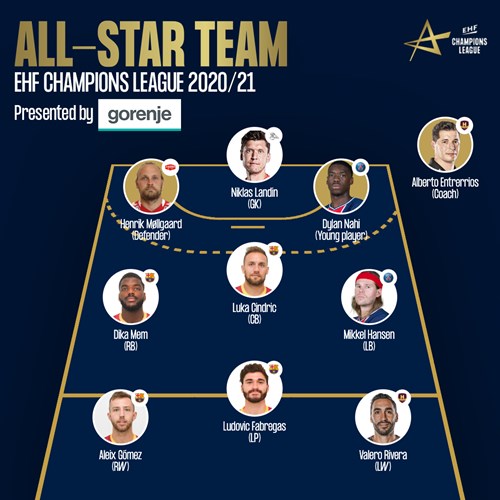 THW Kiel’s Landin and PSG’s Hansen both return for the 2020/21 lineup, presented by Gorenje, from the 2019/20 All-star Team. Joining the iconic Danish duo in repeating the feat is Barça right wing Aleix Gomez. While Landin is back in the goalkeeper spot, both Hansen and Gomez have changed position, with Hansen best left back for 2020/21 after being named All-star Team centre back in 2019/20, and Gomez moving into the right wing position following his nod as best young player last season.

Also returning to the All-star Team, although they were not named in the final selection in 2019/20, are two young French stars for Barça: right back Dika Mem and line player Ludovic Fabregas. The two came through the youth and junior national team ranks together and Mem could still be eligible in the best young player category, at just 23 years of age, yet it is his second selection as best right back of the Champions League, after 2017/18. Fabregas was named as All-star line player in 2016/17 and later best young player in 2018/19.

For the remainder, it is the first time appearing in the All-star Team. Fans chose Valero Rivera from Nantes as left wing while Alberto Entrerrios was named best coach. Rounding out the Barça contingent is centre back Luka Cindric. PSG wing Dylan Nahi earned the best young player nod and Aalborg’s Henrik Møllgaard was named best defender.

Entrerrios continues an impressive run of Spanish coaches in the All-star Team — only one of the seven awards given so far was not for a Spaniard, when Frenchman Patrice Canayer earned the spot on the path to his second Champions League title with Montpellier. Every season aside from that it has been a different Spanish coach named, with Talant Dujshebaev first in 2014/15, Xavi Sabate in 2015/16, Raul Gonzalez in 2016/17, Roberto Parrondo in 2018/19, David Davis in 2019/20 and now Entrerrios.

Furthermore, and as announced at the start of the vote, the European Handball Federation has decided to pay a special tribute to the legacy of FC Porto goalkeeper Alfredo Quintana who passed away in February.

Posthumously, Quintana, together with the 2020/21 All-stars, receives a special award of honour, "Forever a star", to once again remember and honour the very special goalkeeper he was and will always be in the hearts of the handball community. 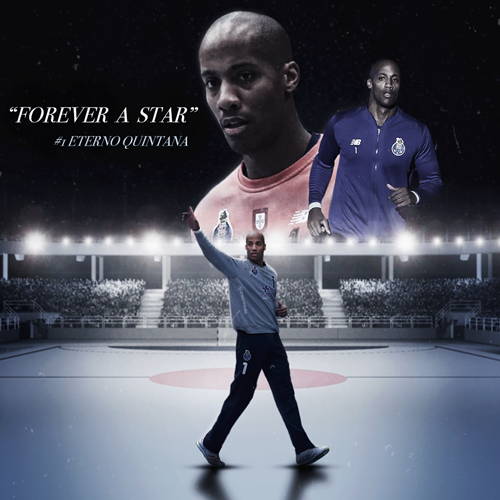 Previous Article Barça’s streak put to the test by Nantes

Next Article Summary: Barça back on top of Europe after six years

Summary: Barça back on top of Europe after six years

LIVE BLOG: Running coverage of the EHF FINAL4 2021, with Barça, Nantes, PSG and Aalborg contesting the title-deciding weekend in Cologne

Barça make it to their 13th Champions League final