The group phase of the first edition of the EHF European League Men has been a wild ride with each of the 24 teams providing us with some thrilling moments over the ten rounds.

Tuesday nights have now become a must-watch handball evening with the quality, determination and grit on display in Europe’s second tier.

Now that the Last 16 is set, it is time to draw some conclusions before the competition resumes on 23 March.

Old powers back in the mix

In recent years, the likes of Chekhovskie medvedi and Kadetten Schaffhausen have struggled to make an impact in the EHF Champions League.

Chekhov had failed to progress past the group phase every season since 2013, while it was 2012 for Schaffhausen, and both finished in the bottom two places in group D last season.

The restructuring of the competitions has not only breathed new life into the new-look second-tier competition but given these clubs a suitable level to compete at and become contenders again, having both earned 14 points in their group and will be seen as very dangerous foes by their French opponents in the Last 16.

Only twice in the past 20 years have we seen a non-German winner of the second tier, the EHF Cup in old money, and the trend looks set to continue as all three German clubs in the group phase won their groups.

While Magdeburg and Rhein-Neckar Löwen looked particularly doming, losing just one game each, Füchse Berlin were pushed pretty hard in an evenly-fought group B.

Going into the final round of matches, there was a chance that three teams could end up on 12 points but Berlin put the race for first place beyond doubt with a confident 10-goal victory over Sporting, ensuring the three Bundesliga clubs will avoid each other en route to the final tournament.

Best of the rest

Orlen Wisla Plock were the only non-German group winner, looking unstoppable until two late losses took a bit of sheen off their pristine record.

Behind them in group A, Abanca Ademar Leon look particularly tough to break down, losing just once and ending four matches in dramatic draws.

French sides USAM Nimes Gard and Montpellier HB have displayed moments of class during the group phase, tinged with the odd bit of inconsistency.

Both could shake things up in the knockout rounds as could GOG, the Danish side with some young world champions and a couple of wise heads. GOG have flattered to deceive at times but could take advantage of the quarter of the draw without a German club. 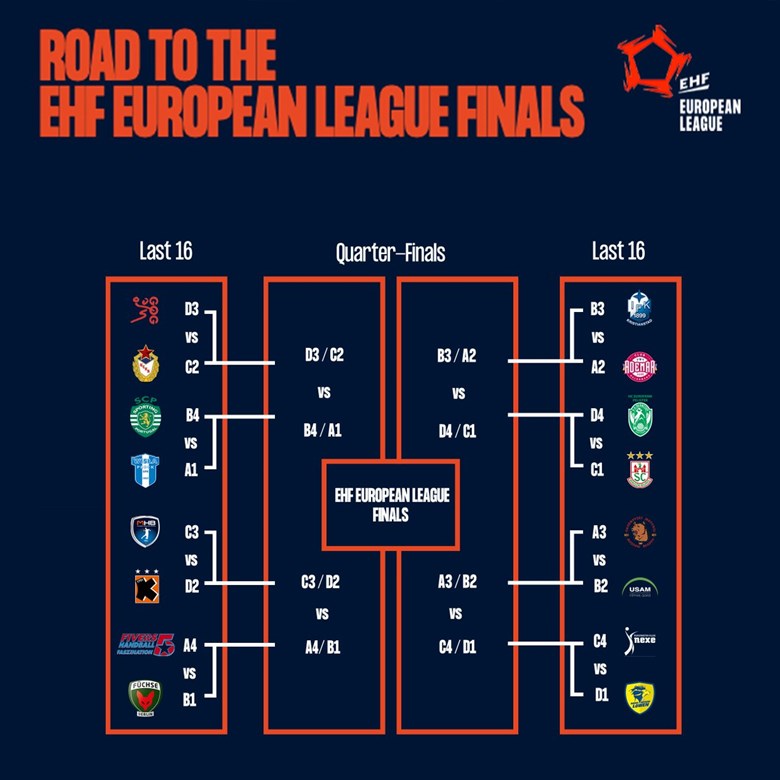 Another club hoping to make the most of that quarter of the draw is GOG’s Last 16 opponents, CSKA.

The Moscow club’s sudden re-emergence on the European handball scene has caught the attention of many with the women’s side shining in the EHF Champions League and the men doing the business in the European League.

What has caught the eye most about this side is their ability to pile on the pressure with their relentless pace in attack, which has seen them tear many of their opponents apart at home, making Velimir Petkovic’s troops a dark horse in the knockout rounds.

One of the surprise packages of the competition this season has been Fivers. The Austrian club, competing in Europe for the first time in nine years, has gone way beyond their expectations, battling to two victories and two draws in group A.

In their final clash, away to Toulouse, they showed composure beyond their years in the final quarter of the game to stay in touch and lose the game by four goals, just enough to beat their guests in the head-to-head record and book a dream Last 16 tie against Füchse Berlin.

With all of their top scorers in their early twenties, this could be just the beginning for the Vienna-based club.

Next Article The blueprint: How Györ became the best team in Europe

Procedures and criteria for the EHF EL quarter-finals

OFFICIAL STATEMENT: What happens if matches cannot be played in the quarter-finals of the EHF European League Men

ROUND-UP: The ELW quarter-finals produced high-quality handball and we put the eight matches under the microscope

QUARTER-FINAL REVIEW: in a hard-fought match, Nantes defeated Zvezda again and progressed to the next stage

Herning-Ikast too strong for Lada again

QUARTER-FINAL REVIEW: the second-leg match between Herning-Ikast and Lada saw a tight battle, but the Danish club went through

Baia Mare make history with another win against Braila

SUMMARY: Nantes Atlantique and Siófok recorded wins on Sunday – confirming their places at the EHF Finals alongside Baia Mare and Herning-Ik…

QUARTER-FINALS PREVIEW: With three away wins last weekend, the favourites are looking to progress to the final act, while Siofok host Astrak…

Debelic: “They will give their best to remain undefeated”

FEATURE: Playing her first season outside Croatia, line player Ana Debelic expects a tough battle versus Siófok in the quarter-finals

Drama in Plock sees luck on Wisla’s side

LAST 16 REVIEW: Sporting CP won by three in Poland, but the aggregate result was favourable for Plock — by one goal

LAST 16 REVIEW: The Russian side drew in Nimes but kept the advantage created in the first leg intact and booked a quarter-final berth