The German way of restarting handball

It was 12 March 2020 when the debut of new German men’s national team head coach Alfred Gislason had to be cancelled. One day later, Germany were supposed to have a test match against Netherlands as the only preparation opportunity before hosting the Olympic Qualification Tournaments in April in Berlin under the helm of their new coach.

Then COVID-19 arrived – and all handball matches in Germany from 13 March on had to be cancelled, including Olympic Qualification, all qualifiers for the Women’s EHF EURO 2020 and the men’s qualifiers against Ukraine for the World Championship 2021.

Since May, many regulations have been relaxed, but as the Federal States are the authority in management of the pandemic, the situation differs from state to state. All professional clubs have been allowed to train for some weeks, but in many states the smaller handball clubs are only allowed to train with 10 or 12 players at the same time in the arena, and only if the training halls are already open.

But the plans for the restart of the top competitions are ready: The Women’s Bundesliga is scheduled to start at the beginning of September, while the men’s Bundesliga – with 20 teams and 38 rounds, as no team is relegated due to COVID-19 – will start at the beginning of October. The question as to whether fans will be allowed to attend the matches or not remains open, and again the rule might differ from region to region.

The German Handball Federation (DHB) built a taskforce with the leagues very early, to be prepared for the restart in all departments, including beach handball. First, DHB started a successful series of individual ‘stay at home’ training sessions for all different age groups and training levels, followed by a series of podcast including national team players, coaches, officials and referees. In addition, DHB showed a ‘re-live series’ of all Germany team matches at the World Championship 2019 on home ground – all to keep interest in handball alive, although there were no matches.

However, the core point was a strategy called ‘return to play’, which includes eight stages from individual training at home via training of little groups to team training with contacts to finally competitive handball matches, plus a proposal for a timeframe for all stages. This ‘return to play’ strategy was developed week by week with certain topics, such as hygiene plans, coaching proposals, kids’ training and the ‘return to competition’ strategy, with exact timelines for Bundesliga teams for when and how to start their preparations, which were also adapted for other leagues and age groups.

Parallel, many video conferences were held by coaches or referees under the helm of the DHB. “We wanted to find the right answers for this crisis. We wanted to present solutions and timeframes for the whole of German handball, from primary school kids up to professionals,” Mark Schober, board chairman of the DHB, explains.

“In the time without matches or trainings we could focus on development and many little things to improve on court and in administrative or organisational matters in future,” adds Axel Kromer, sports director of the DHB. 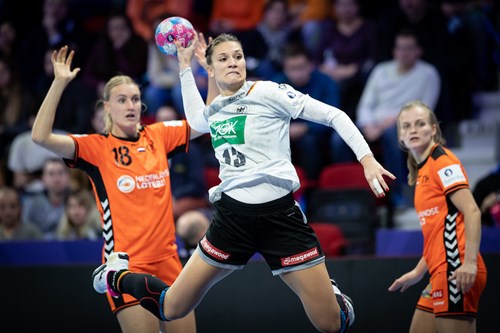 All national teams – from under 16 to senior men and women – had online training courses, to stick together with distance, and team-building measures for groups from the same club were also implemented. In August, the first real training sessions for the Younger Age Category national teams will start. In parallel, the beach handball national teams will train on a regional base.

As part of the so-called ‘Teamsport Deutschland’ organisation, which includes football, handball, basketball, volleyball and ice hockey, the German Handball Federation worked intensively on an overall concept to keep the team sport sector alive. Chaired by DHB President Andreas Michelmann, ‘Teamsport Deutschland’ not only worked on a general structure for a restart (hygienic measures, spectators rules, etc), but fought hard for a bail-out package.

This passed parliament and now guarantees the professional leagues (men and woman, except Bundesliga 1 and Bundesliga 2 in football) the amount of 200 million Euros for 2020, to substitute the financial loss for all clubs due to COVID-19. “This bail-out package is a recognition of the social relevance of our sports. Without income from matches, handball and the other league sports cannot survive,” said Michelmann.

After the decision to restart in October, Uwe Schwenker, President of Men’s Bundesliga, hopes to “set the framework to have spectators in the arenas. Emotions are a core part of handball, not only on the court, but also in the stands.”

To contribute to the public health effort in Germany, the DHB and both professional leagues are promoting the newly created ‘Corona warn app’, which has been downloaded more than 15 million times so far in Germany.

“We all hope for a close restart of handball matches all over Germany. We also know that everything will be different compared to the start of the year – going to a restaurant is different now, just like playing handball will be different. But I am sure we can all manage to still have a great and attractive sport. We are supporting our clubs in engaging new members and young players with new programmes to activate the people,” says Michelmann.

And Alfred Gislason? He will have his debut as men’s national team coach at the beginning of November, when the EHF EURO 2022 qualification campaign starts with the home match against Bosnia and Herzegovina.

Next Article ebt makes welcome return to the sand

BACK TO HANDBALL: Poland's handball community has come together during the coronavirus pandemic and is now looking forward to the start of a…

Back to handball: France eager to start playing

BACK TO HANDBALL: One of Europe’s biggest handball countries, France, has been eager to start playing again but will still have to wait a fe…

BACK TO HANDBALL: With restrictions gradually easing in Europe, Chris O’Reilly looks at how Norway prepares for a return to action

Back to handball: How the Dutch got going again

BACK TO HANDBALL: With restrictions on sport gradually easing around Europe, this series takes a look at how national handball federations a…

Schmid’s play of the day and Norwegian adventures

WEEKLY UPDATE: Andy Schmid proves he is not just one for on-court highlights as summer holidays continue and the 2020/21 season draws nearer…

NEWS: The European Handball Federation renews the contract with the 46-year-old until 30 June 2024

NEWS: Slovenia’s long-term leading sports official, who played an instrumental role in the development of the Olympic movement in Europe, di…