This is the last article in a series written by data analyst Julian Rux on the use of data tracking at the Men’s EHF EURO 2022 in Hungary and Slovakia.

Just over six weeks have passed since Sweden lifted the trophy at the Men’s EHF EURO 2022. For the first time since January, Europe’s men’s national teams are back together this week, so let’s one more look back at interesting tracking data collected at the tournament in Hungary and Slovakia.

In the last 14 months, a lot has been written and spoken about Mathias Gidsel. Nikola Karabatic even called him the best player in the world. Analysis based on tracking data from KINEXON suggests he could actually be a player who is going to transcend how we look at the game of handball altogether? And is there a correlation to Sweden’s title win?

Judging Gidsel by traditional statistics, he has played an outstanding EHF EURO 2022. Although he played only one minute in the bronze medal match, he was the top field goal scorer among all players with at least four games played with a 5.4 goal-per-game rate while shooting an outstanding 88.4%.

Advanced statistics, such as expected goals, show even better how outstanding he is.

Each shot in handball can be given a likelihood of being scored compared to averages taken of thousands of previous shots, also known as expected goals (xG). In football coverage, this concept has prevailed in recent years. Tracking data by KINEXON allows to quantify that and much more. For example, the average number of xG per shot allows to assess the shot quality of a player.

A line player in disguise

Looking at the average shot quality of all the players who have taken more than 25 shots (15 for line players) at EHF EURO 2022, one stands out immediately: Mathias Gidsel. 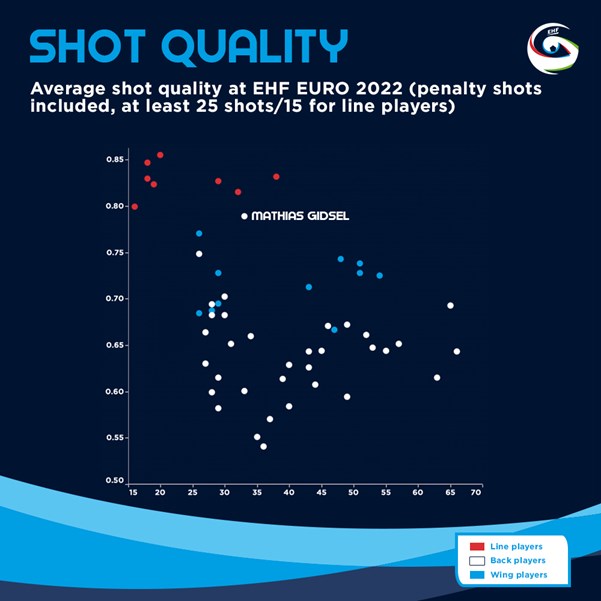 The average shot quality of a player is quite closely linked to the playing position of that player. The graphic shows the different positions highlighted by each colour are quite well clustered. The shot quality of line players is roughly at 80-85%; wing players are at 65-75% and have an average of about 55-70%.

To put this in real terms: To score 10 goals the line players would have to take 12 shots (on average), wing players 13.5, and back players 15.3 (based on the shot quality of the better players in the group).

However, Mathias Gidsel is breaking out of these clusters. The Dane is shooting the same quality of shots as line players. Excluding penalties makes it even clearer. Then, a large wave appears and some of the back players and wing players shot quality decreases. 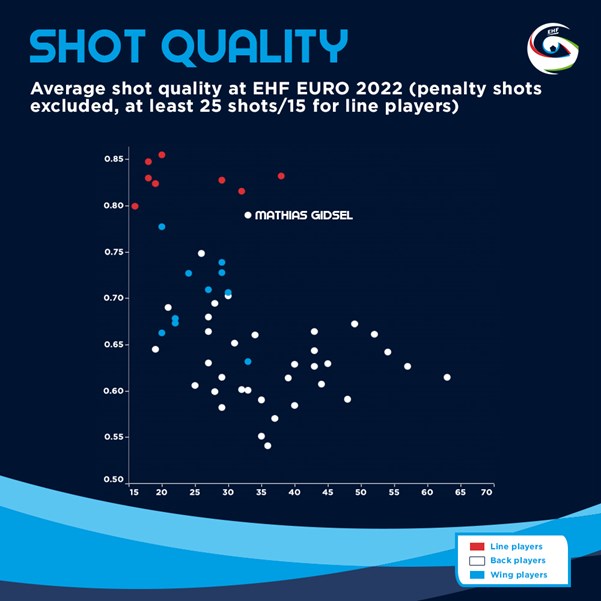 It is remarkable to have a higher shot quality than all other back players by such a distance. But to do it whilst including the shot quality of penalties throws is quite significant.

Trying to ascertain some actions the line players might make up some of this value, like penalties received, it gets even more extreme.

Gidsel won sixteen penalties in EHF EURO 2022, far more than any other line player on the visual. Even rationalised for court time he won a penalty just over every 16 minutes he was on the court. Nobody else gets close.

The second white dot moving away from the cluster of back players toward the line players is Luc Steins. He is the only other player that averaged one penalty received within every 30 minutes. (Bence Banhidi did better than Gidsel and Steins and won five penalties in the 50 minutes of his court time, but it remains to be seen whether that would extrapolate over a larger sample size.)

These two concepts go hand in hand. Penalties are awarded most commonly in situations involving shots taken around the six-metre line and there is a higher xG value attached to these types of shots.

However, it’s a different story looking at all shots of Denmark. In the following graphics all shots taken are divided by area they were taken from. The darker the colour, the greater the number of shots while the size shows the average distance.

Surprisingly, from the right back area their average shot distance was 8.52 metres – further than all other semi-finalists and even 1.5 metre further away than Sweden. The reason for that is simply that Gidsel’s backup Niclas Kirkeløkke and other teammates are mostly different kind of players. Kirkeløkke took 41 shots and 27 of these were categorised as backcourt shots whereas only four of Gidsel’s 43 were from that range. 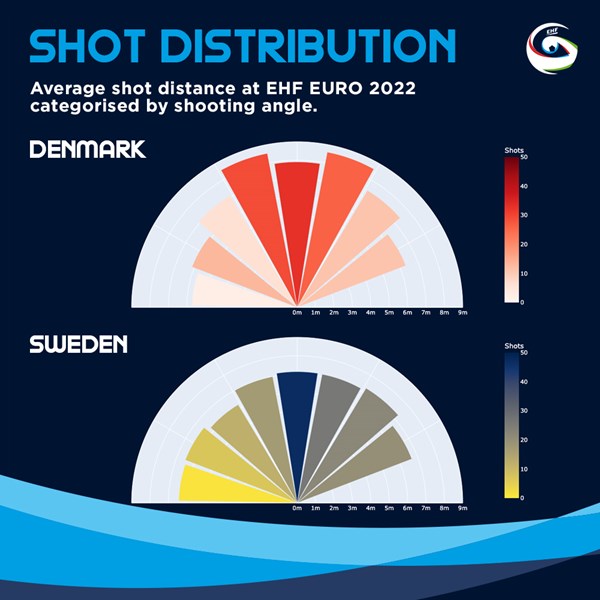 Looking at the other three semi-finalists, they took most of the shots closer to the middle of the court as well. But there are other things that may not be immediately obvious without this data. Sweden were incredibly effective in the three central zones where most shots came from. One reason: The European champions were shooting on average from around seven metres from the goal.

In contrast, France’s and Spain’s distances are a bit further. Both have two of the middle zones with averages closer to eight metres and one closer to seven metres. But none compares to the effort of Sweden. On average from these zones, shooting nearly one metre closer to the goal is quite remarkable for teams categorised so closely in the final standings. 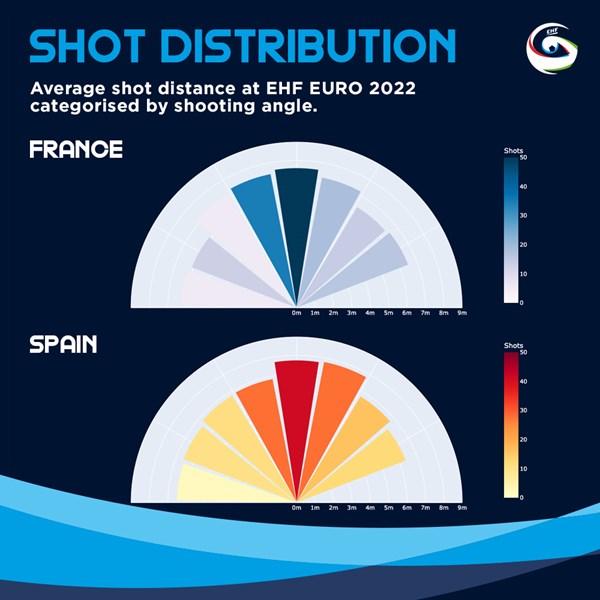 That handball is changing and becoming more efficient due to statistically favoured shot-taking isn’t news. But especially Mathias Gidsel is taking it to another level. Can the type of player that Gidsel represents, transcends how we look at the game of handball altogether?

The future will bring the answer, as there is no data available to compare to similar players of past generations. But compared to current players, he is providing a significantly higher level of efficiency at a higher rate of production than almost any other player on the court, and possibly redefining the roles of back players at the same time.

Mark Hawkins is handball coach and analyst. The EHF Master Coach is former national team player and Olympian for Great Britain and currently head coach at IK Våg. Previously, he was assistant coach for the Chinese women’s national team.

Next Article Elverum’s historic clash with PSG chosen as MOTW

Women at the heart of the game: Marta Bon's advocacy

Serbia hoping change at the top will bring results

TEAM PRESENTATION #1: Serbia. With coach Uros Bregar in charge for his first EHF EURO with the team, Serbia are targeting the main round

NEWS: The 16 participating teams for the Women's EHF EURO 2022 have confirmed their official 35-player squads.

Women at the heart of the game: Gordana Naceva’s love for sp…

Women at the heart of the game: Katarina Bulatovic’s pride

NEWS: The Olympiahalle in Munich has been confirmed as the sixth and final venue for the Men's EHF EURO 2024

NEWS: The application process for volunteers in the Slovenian host cities of Ljubljana and Celje is now open

Media representatives can now apply for accreditation for the Women’s EHF EURO 2022 taking place in Slovenia, North Macedonia and Montenegro…

International iGaming Operator Coolbet has joined the official partner list of the Women’s EHF EURO 2022 which will be played in Slovenia, M…