The stage for the penultimate matches of the EHF European League Women 2021/22 is set, following the draw to determine the semi-final pairings on Thursday afternoon in Vienna. Viborg will meet Baia Mare and Herning-Ikast will face Bietigheim when the EHF Finals Women get underway on 14 May, with the winners progressing to the trophy match on 15 May and the defeated teams to battle for bronze. 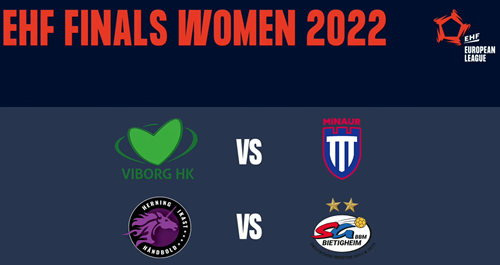 The venue for the second edition of the EHF Finals Women was announced earlier on Thursday, with Viborg confirmed as the host city and the matches to be played in Vibocold Arena.

Viborg HK will therefore play on the home court, while another EHF Finals Women participant, Herning-Ikast Handbold, will not be far from their own base in Herning.

Herning-Ikast reached the same stage of the EHF European League Women last season, ranking fourth, right behind the other side that also contested the first EHF Finals Women, SC Minaur Baia Mare. After both lost their 2020/21 semi-finals, they will hope for a different outcome against their respective opponents this time around.

For Viborg, the 2021/22 edition marks a return to the medal round of a European cup competition after a three-season wait, following their last semi-final participation in the EHF Cup in 2018/19. The most recent title celebrated by the three-time Champions League winners was the Cup Winners’ Cup back in 2014.

German side SG BBM Bietigheim have only reached the semi-final round in a European cup competition once before — in the EHF Cup in 2016/17.

SUMMARY: A minute-by-minute rundown of the Energi Viborg EHF Finals. Bietigheim clinched the title ahead of Viborg; Herning-Ikast secured th…

SEMI-FINAL PREVIEW: Four matches over the next two days will decide the new champions in the EHF European League Women