A few years ago, Krim Mercator Ljubljana embarked on a journey that should bring the former two-time champions back to the top of European handball. Reaching the quarter-finals of the EHF Champions League Women last season indicated the Slovenian side are on the right path.

Now heading into their 28th straight EHF Champions League season, Krim hope to repeat their 2021/22 success and, led by new head coach Dragan Adzic, continue their work on the way back to the top.

Most important question: Can Krim get to the quarter-finals (or better) again?

Krim always have high objectives ahead of a season – and 2022/23 is certainly no exception. After their run to the quarter-finals last season, the ambitions at the Slovenian club are high, again.

Wanting to return to the top, Krim have gone through changes in the last two seasons. Players like Andrea Lekic, Ana Gros, Oceane Sercien Ugolin and Katarina Krpez Slezak left the club, but strong reinforcements will fill the gaps.

“We have grown as a team in different segments, which gives us confidence in achieving even higher goals in the upcoming season,” says team manager Deja Ivanovic.

A mixture of experience and ambition, led by Montenegrin head coach Dragan Adzic, Krim will have to give their best in a strong group A.

Under the spotlight: Barbara Lazovic

Lazovic returns to Krim after eight years abroad, joining from upcoming group phase opponents CSM. The experienced right back is also coming back after the knee injury that had kept her out since November 2021. The Slovenian national team player is one of the club’s biggest reinforcements this season. Playing for Krim on two occasions earlier (2007-09, 2010-14), Lazovic is coming home at age 34.

“We have many new players in the club and it will take some time to get to know each other. I believe everything will fall into place at the start of the EHF Champions League. I believe in this team and what we can achieve,” says goalkeeper Jovana Risovic.

Krim meet several strong opponents in the pre-season preparation period – including HC Podravka Vegeta, CSM Bucuresti, and WHC Buducnost BEMAX. The matches should get the team ready for the season opener against CSM on 11 September and the game against Vipers in Ljubljana the following week.

“We hope we will have a good start of the season. However, we have to face tough teams in the group phase which means we will have to go step by step if we want to develop as a team like we wish,” adds Ivanovic.

The 2022/23 season marks the 20th anniversary of Krim’s second EHF Champions League trophy. Two years after their maiden triumph, the repeated the success in 2003 by defeating Valencia 63:58 on aggregate in the two-leg final.

284: the number of matches Krim have played in the EHF Champions League so far. Only Buducnost have played more matches: 290. Krim have won 124 of their 284 matches. 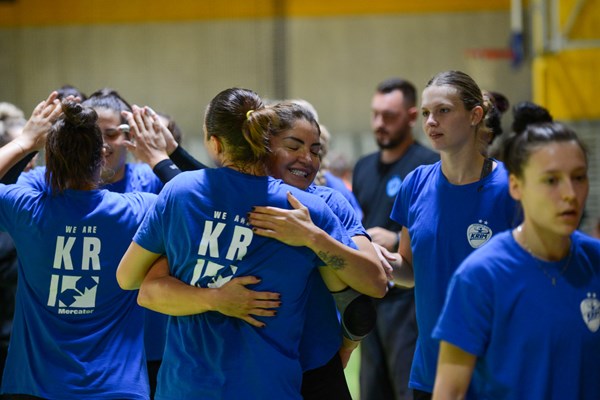